We have loved the animal to near extinction 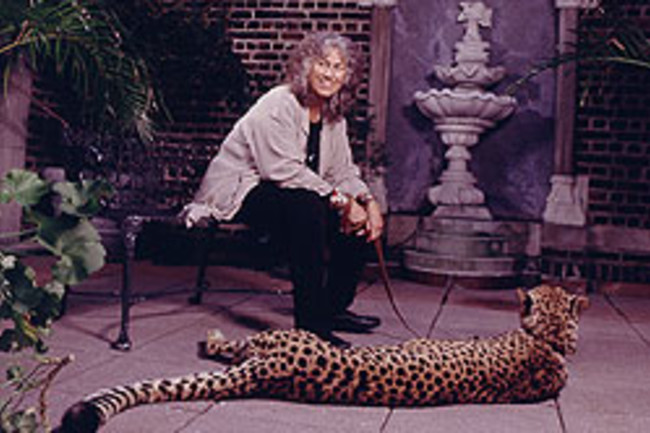 Laurie Marker cofounded the Cheetah Conservation Fund in 1990. Based in Namibia, it rapidly became a model for innovative ways to protect endangered species while still permitting human use of the same habitat. Programs vary from training dogs to guard wildlife from predators such as the cheetah to educational programs that convince children to help protect their nation’s wildlife. Her work won her Time magazine’s Hero for the Planet award in 2000 and the ChevronTexaco Conservation award in 2003.

How did you first get involved with cheetahs?

M: I grew up on the back of a horse and always thought the horse would be the focus of my life. As I got older, my mother kept putting me in a lab coat. My parents said that you couldn’t make a living with animals. I went through college in agriculture for viticulture and enology—I was actually a winemaker, trained in winemaking and grape growing. I moved to Oregon from Napa to start up a winery and vineyard. I needed a job to support my business. A wildlife park had just opened down the road. So I went to the wildlife park, and I said, “I’ve just moved two miles down the road, my background is as a vet tech, and you should hire me!” It was the first time I ever actually saw a cheetah—or a picture of a cheetah. I ran the veterinary clinic and nursery. Our cheetahs had just come in from Namibia, and nobody knew anything about cheetahs then.

Conservationists are often at odds with local people. How did you avoid that when you went to Namibia to study cheetahs?

M: If you befriend people and get them involved, you are going to get a lot further. Looking at a lot of the early conservationists—people who were hugging trees—and the controversies that went on, I could see that the only way to change the way people think is to get them to think in a similar way, and that’s going to take education. Instead of just saying, “Don’t go and kill the cheetah,” I gave people years of knowledge and understanding about the species.

What are the cheetah’s prospects?

M: Part of my training is in modeling and running a studbook, a managed unit of species conservation. I know that there are 120 to 15,000 animals in 28 countries—3,000 here and 1,000 there and 25 there. I can very quickly tell you that two-thirds of the populations of cheetahs in those 28 countries are going to be extinct in the very near future.