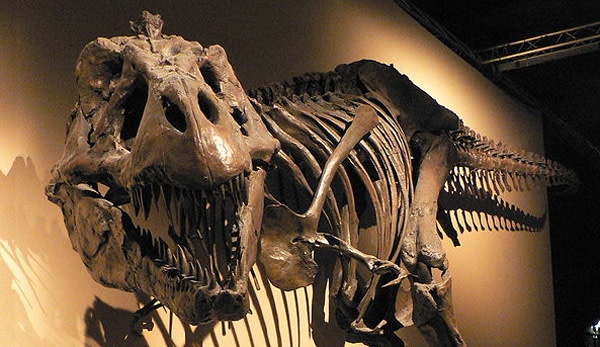 For some dinosaurs, the best strategy was to grow fast and breed early. New fossil evidence suggests that at least three species, including celebrities like Tyrannosaurus

were having sex in their teens. In this way, their pace of growth and maturity was closer to that of modern birds and mammals than it would be to a reptile scaled-up to the same size. They also started to breed well before they had finished growing, which suggests that they lived relatively short and brutal lives and needed as much time as possible to reproduce before they met an untimely demise. Modern back-boned animals with high adult death rates use a similar strategy. The new discovery rests on a special type of calcium-rich bone called ‘medullary bone’. Those modern-day dinosaurs, the birds, produce it when they lay eggs and it acts as a ready source of calcium for the creation of shells. In 2005, palaeontologists found medullary bone

in the fossilised leg of a T.rex, a dead give-away that the animal was a female and that she was about to lay eggs. It seems strange that this special tissue was only found so recently despite the vast amount of dinosaur skeletons that have been examined. But modern birds rapidly absorb medullary bone if it isn’t used after three or four weeks. If dinosaurs did the same, it might explain why this telltale tissue has gone unnoticed for so long. Since then, Andrew Lee

from University of California, Berkeley, have found two new samples – one in an Allosaurus, a common Jurassic hunter, and another in a medium-sized plant-eater called

Like the T.rex, both of these individuals were pregnant females. Lee and Werning estimated the ages of the three dinosaurs at the time of their death by looking at the rings in their bones. Dinosaur skeletons grow by laying down new layers of bone every year, so much like the trunks of trees, their cross-sections reveal growth rings that provide clues about their age. In this case, they showed that all three were mere adolescents – the Tenontosaurus was just 8 years old, the Allosaurus was 10 and the Tyrannosaurus was the eldest at 18. The presence of medullary bone suggests that they were all capable of reproducing at this age at the very latest, which is years (or even decades) ahead of a similarly sized reptile. As a comparison, a reptile scaled up to the size of a T.rex would only reach sexual maturity at the age of 31. Lee and Werning also found that all three dinosaurs were still getting bigger. None of their growth rings were drawing closer together as you would expect to see in an animal that had reached its maximum size. This means that they were sexually active before their growth spurts had finished and in this way, they were actually quite similar to modern reptiles. Medium-sized and large mammals, ourselves included, use a similar strategy but small mammals and all birds stop growing well before they start breeding. Finding out how dinosaurs grew tells us about many other parts of their lives. Among modern animals, those that breed early tend to be ones that die early and it’s likely that many dinosaurs faced the same challenge. After all, if the risk of death is very high during your adult life, it pays to be able to start a new generation as early as possible. The combination of young deaths and even younger sex also suggests that the dinosaurs hatched from their eggs as well-formed and developed babies capable to fending for themselves. Reference: Lee, A.H., Werning, S. (2008). From the Cover: Sexual maturity in growing dinosaurs does not fit reptilian growth models. Proceedings of the National Academy of Sciences, 105(2), 582-587. DOI: 10.1073/pnas.0708903105