Dinosaurs Got Tumors, Too 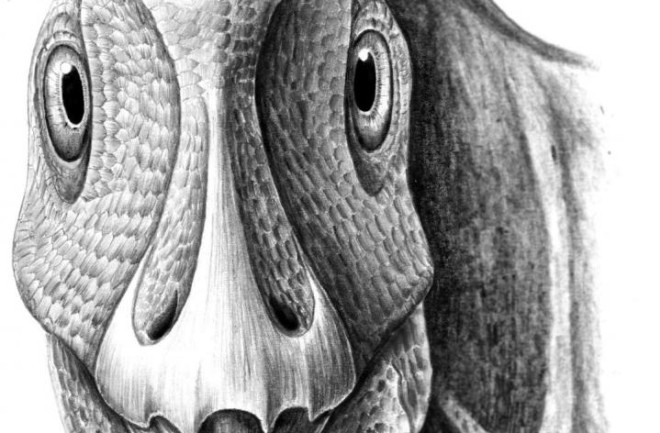 Aw, look at those big eyes... and that benign tumor visible on the lower left jaw of a doomed duck-billed dinosaur found in Romania. Credit: Mihai D. Dumbrava. New analysis of a sub-adult duck-billed dinosaur unearthed in Transylvania revealed the l'il fella had more than predation and a looming mass extinction to deal with: the young Telmatosaurus transsylvanicus had the same kind of non-cancerous tumor found today on mammals (including humans) and some reptiles. The lower jaw bones belonging to the 67-69 million-year-old herbivore were found several years ago. Researchers at the time noted the bone's abnormal appearance, but no one took a good look at — I mean a really good look at it — until now. Romanian Ph.D. student Mihai D. Dumbrava led a team that studied the fossil with micro-CT scanning, a technology used in medicine and also to examine microfossils. The high-resolution digital model of the lower jaw revealed all the telltale characteristics of an ameloblastoma. That's a non-cancerous tumor that pops up, no pun intended, in modern animals, especially on the jaw. Researchers are classifying the wee T. transsylvanicus specimen as a sub-adult, older than a juvenile but not quite mature enough to vote or buy cigarettes. Their open-access findings, the first to document such a "modern" tumor in the fossil record, were published in Scientific Reports. The tumor was apparently still growing but was likely not painful for the animal. Researchers can't say whether the growth was a factor in the animal's death, however, since the rest of its skeleton was apparently washed away in the ancient river channel near where the fragmentary jaw was found.