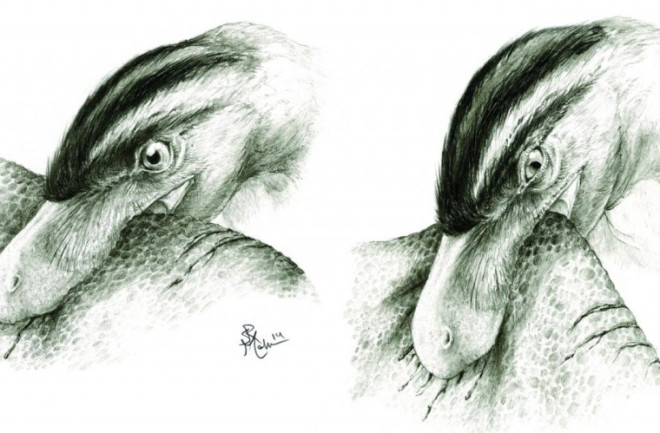 Microwear patterns and other details on a number of dinosaur teeth suggest differences in prey despite a shared noshing technique, the puncture-and-pull method shown here. (Credit Sydney Mohr/Current Biology) What did dinos munch for lunch? A new two-pronged approach to analyzing dinosaur teeth reveals that, while all of the dinosaurs in the study were meat-eaters, when sidling up to The Old Cretaceous Country Buffet some went for the soft-serve prey and others gravitated toward the hard stuff. Eyes may be the window to the soul, but teeth are the record-keepers of an individual. Earlier this month, a team of researchers determined whether meat or fish was on the menu for assorted apex predators 100 million years ago in the massive river delta systems of what's now North Africa. That study looked at calcium isotopes preserved within the teeth, but the exterior of a tooth can be just as informative. A separate team announced today that, by analyzing serrations and microwear patterns on the teeth of several Late Cretaceous theropods — bipedal, carnivorous dinosaurs — differences between species suggested they went for different prey, even though their method of killing the animal was the same. Sink Your Teeth Into This Let's start by taking a gander at the slightly ducky-looking fella at the top of this post (technically, it's Saurornitholestes, one of the species included in the study). What you've got here is an illustration of the "puncture-and-pull" method of grabbing prey. The animal bites down and pulls back with its jaw still closed, all the while creating little scratches on its own teeth. Those little scratches — the microwear pattern — record the direction of the action, first down and then back. Similarities in the microwear pattern suggested to the researchers that the three different kinds of dinosaurs in their study were all using the puncture-and-pull method. There was something missing from the teeth, by the way: pitting. Pitting in carnivore teeth can be caused by gnawing or crunching into bone. The absence of it suggests that the dinosaurs, like Komodo dragons (which have similarly shaped teeth that also are not typically pitted), avoided bone by either swallowing prey whole or selectively defleshing carcasses. Now let's take a look at the dinosaurs themselves. The team chose teeth from different coelurosaurians, a branch of the theropod squad that encompasses a huge range of diversity, from the pint-sized ancestors of birds (and birds themselves) to giants such as T. rex. The researchers focused on Dromaeosaurus, Saurornitholestes and Troodon, all somewhat closely related and all from the back half of the Cretaceous, roughly 66-100 million years ago. Theropod teeth generally follow the same basic plan, curved and pointy, with some variation. And the devil, or at least the denticles, is in the details. Denticles are the serrations running down the back of the tooth, and they can vary between species and even within species, as teeth are worn down over time. In the comparison below, included in the study, dinosaur teeth from the three species studied are scaled to be the same size, at crown height, with each other and the tooth of a less closely related coelurosaur, Gorgosaurus, included for illustrative purposes.

Dinosaur teeth from the three species studied have been scaled to same crown height for comparison of general shape and denticle details...with T. rex relative Gorgosaurus, not part of the study, joining the mix just for fun. (Credit Victoria Arbour/Current Biology) The relative width and curviness varies between the species, but the key thing here's the denticles: Dromaeosaurus, like Gorgosaurus, has squarish-denticles, while those of Saurornitholestes are more pointy. Troodon, meanwhile, has hooked denticles distinctly different than all the others. Stress Eating: We've All Done It. Which brings us to the second prong of the study. After analyzing microwear patterns, the researchers performed finite element analysis on models of the dinosaur teeth. It's a number-crunching method most commonly used by engineers to assess things such as structural integrity, aerodynamics and energy transfer. In this instance, however, researchers applied the finite element method to determine how and where the teeth were stressed when biting prey from different angles. The results are intriguing: For all of the dinosaur teeth analyzed, the denticles bore the brunt of the greatest stress. The teeth of the dromaeosaurids, including the species Pyroraptor featured in the image below (and also an excellent band name), and Saurornitholestes appeared to be well-adapted to biting prey at a wider range of angles without risking tooth breakage. Troodon's teeth, however, didn't handle stress that well. The troodontid teeth, with their fancy hooked denticles, needed to contact prey at or near the optimal bite angle to avoid failing (also known as breakage — ouch). What's interesting about that finding is that Troodon's diet has been the subject of much debate in paleontology due to its unique denticle pattern. Previous studies, not involving finite element analysis, concluded the animal ate differently than closely related dinosaurs. Paleontologists believe most theropods were hypercarnivorous, eating meat almost exclusively (though at least one was apparently herbivorous). Various researchers had previously proposed that the troodontids, however, were insectivores, omnivorous scavengers or yes, even plant-eaters. Herbivory is the least likely of those options, due to a suite of other anatomical traits that point to at least some degree of carnivory. But the authors of today's study conclude that, while the other dinosaurs studied appeared well-adapted to biting and holding on to struggling prey, including large animals, Troodon was not. Instead, it's more likely that troodontids went after small animals, possibly invertebrates and other squishier fare. I'm sure they would have found humans palatable. The study appears today in Current Biology.