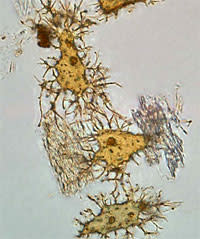 These cells look like fairly typical bone cells. They appear to be connected to each other by thin branch-like projections and are embedded in a white matrix of fibres. At their centres are dark red spots that are probably their nuclei. But it's not their appearance that singles out these extraordinary cells - it's their source. You're looking at the bone cells of a dinosaur.

They come from an animal called Brachylophosaurus, a duck-billed dinosaur that lived over 80 million years ago. By looking at one of its thigh bones, Mary Schweitzer from North Carolina State University has managed to recover not just bone cells, but possible blood vessels and collagen protein too. Their presence in the modern day is incredible. Time usually isn't kind to such tissues, which decay and degrade long before harder structures like bones, teeth and armour are fossilised. 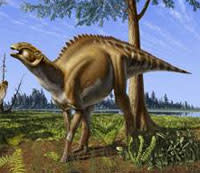 This is the second time that Schweitzer's team have recovered ancient protein from dinosaur bones. Two years ago, they pulled off a similar trick with collagen protein from the bones of Tyrannosaurus rex. That discovery was a controversial one, and many scientists were justly sceptical. Last year, one group reinterpreted the so-calledsoft tissuesas nothingmore than bacterial biofilms, "cities" of bacteria not unlike the plaque on your teeth or slime on moist rocks.

Now, Schweitzer has returned with another volley in the debate, and one which considerably strengthens the case for preserved Cretaceous proteins. From the bone of Brachylophosaurus, she has uncovered tissues that bind to antibodies designed to target collagen and other proteins not found in bacteria, including haemoglobin and elastin. And her experiments were duplicated by independent researchers from five different laboratories. It seems that her Tyrannnosaurus discovery was far from a one-hit wonder.

Schweitzer attributed the staying power of the Tyrannosaurus tissues to the fact that the animal was deeply buried in sandstone. So this time, when she discovered the skeleton of a Brachylophosaurus in the same condition, she was ready to ensure that its thigh bone made it from dig site to test tube as quickly as possible. The bone itself was never exposed to the elements. It was sealed in a jacket of the same sediment it was preserved in. Back in the lab, it was uncovered, quickly wrapped in foil using sterile tools, and placed in sealed jars with dehydrating crystals until it could be analysed.

The team stripped the minerals away from some fragments to leave behind microscopic structures that strongly resembled blood vessels and cells, preserved in a matrix of parallel fibres. For comparison, they subjected the bones of a modern ostrich to the same treatment.

The fibrous matrix was indistinguishable from those in ostrich bone and glowed under a mercury lamp just as modern bone collagen does. The cells had the same texture, size and features of modern bone cells, including potential nuclei at their centre, and thin projections called filopodia that connected them to each other and the surrounding matrix. The vessels were transparent, hollow and flexible and contained a red substance that looked like dried blood; again, their texture was very similar to that of ostrich blood vessels.

According to Schweitzer, biofilms couldn't produce structures this diverse. "Biofilms are essentially slime and bugs," she says. "As such, they're rather amorphous and their chemical profile is based on gradients." The dinosaur tissues, however, are tremendously varied in texture, shape and colour at a very small scale.

Schweitzer found that glowing antibodies designed to target modern proteins also stuck to the tissues recovered from the dinosaur bone. These included collagen, osteocalcin (a bone protein), elastin (a protein unique to back-boned animals) laminin and haemoglobin (the oxygen-carrying protein in red blood cells). If the dinosaur tissues were first mixed with enzymes that break down these proteins, such as collagenase and elastinase, the antibodies no longer stuck to them (see below). And none of the sediment from the dig site yielded any traces of these proteins, proving that they weren't coming from any other source.

These results strongly support Schweitzer's assertion that the white fibres she recovered from dinosaur bones were indeed collagen, the cells were bone cells and the vessels were blood vessels. She even had her experiments successfully repeated by two other independent laboratories headed by Raghu Kalluri and Lewis Cantley.

Schweitzer even managed to analyse some of the amino acids that made up the dinosaur collagen, using a technique called mass spectrometry. The technique revealed the sequences of eight stretches of amino acids that hailed from two versions of collagen. Schweitzer managed to sequence more than twice as many amino acids as she did from the tyrannosaur bones. And among these was hydroxyproline, a chemically modified version of the amino acid proline that bacteria can't produce - another major blow to the biofilm theory. Again, these protein sequences were confirmed independently by the laboratory of William Lane.

Schweitzer says that the scepticism that greeted her tyrannosaur discovery was "appropriate" but her new results strongly support the idea that soft tissues and their original proteins can be preserved at least since the late Cretaceous period. How is that even possible?

"Well that's the real interesting question, isn't it?", agrees Schweitzer. "According to all of our models and all bench-top experiments exposing proteins to artificial conditions, it [shouldn't be possible]. That is an area of active research in my lab. We're in the process of testing that very question through actualistic experiments and other means. We have some ideas about the chemistry that might allow such preservation, but we're still in the process of working it out. Stay tuned!"

"I see this research expanding exponentially," she says. "The biggest hurdle is showing and convincing people that it can be done. Next is convincing them it is worth the effort." Certainly, some scientists branded her previous work as trendy but niche science. Rich of Evolgen described it as "a sexy method that will probably be difficult to implement elsewhere."

But others see wider potential. One of her co-authors is Raghu Kalluri, a cancer researcher who works on the biochemistry of collagen, and who sees great implications for his seemingly unrelated field. "This study further proves that collagen I is very stable and thus offers new insights into its role in organ fibrosis and tumor growth," he says.

As tumours progress, they produce huge amounts of collagen I, which helps them to grow. The same build-ups happen as organs age, which leads to organ fibrosis. The exceptionally stable protein doesn't go away easily and slowly compromises the function of organs as it accumulates. Kalluri is interested in finding ways of melting away collagen from tumours and fibrotic organs without altering it in places like bones where it's needed. "We hope to use the knowledge gained by this dinosaur study to help come up with new therapies," he says. "The collagen sequences found in this study might also offer new insight into the most stable regions of this protein and help in tissue engineering efforts."

For Schweitzer, the search for dinosaur soft tissues is just beginning. "We are working at the very threshold of the most sensitive technologies that we have. I think that as technologies increase in sensitivity and resolution, this will become a viable avenue of investigation, despite the risky nature of it."