Dinosaur Handprints Show It Could "Hold a Basketball," Not Dribble 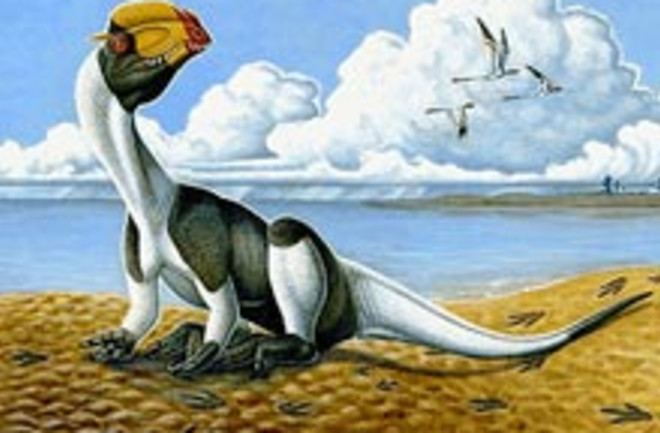 Two handprints pressed into the mud of an ancient lakeshore 198 million years ago has given paleontologists new insights into the anatomy and evolution of early carnivorous dinosaurs. The theropod who crouched down had a bird-like forelimb structure with palms that always faced inwards, says lead researcher Andrew Milner, which indicates that they stopped using their forelimbs for walking early in their evolutionary history. The handprints discovered in Utah are part of a larger track that

clearly show the hind feet and, occasionally, the dragging tail. But at one point, Milner said, the theropod apparently stopped and crouched to rest. At that point, between the footprints, is the clear circular impression of the ischium or pelvis, "basically a butt print," Milner said. And to each side of the tracks are the handprints, which are mirror images of each other. They clearly show the third digit pressed into the ground and traces of the second digit, with the claw curling inward. The hands were positioned as they would be for "holding on to a basketball rather than dribbling it," [Los Angeles Times]

, comments paleontologist Tom Holtz, who wasn't involved in the research. The new study, published in the journal PLoS ONE, indicates that the unidentified species of theropod couldn't

turn the palms of its hands face down or face up like a human, but could bend them back against the arm similar to how a bird folds its wings. Jerry Harris, who coauthored the paper, said being able to fold the hands against the arms evolved before feathery wings -- and at a time earlier than the period normally associated with theropods [The Salt Lake Tribune].

By becoming entirely bipedal, theropods were free to develop specialized forelimbs that could be used for fighting, mating, or holding struggling prey, researchers say. (The most famous theropod, Tyrannosaurus rex, which came along around 68 million years ago, also had famously runty forelimbs.) The study also supports the theory that birds are the living descendents of dinosaurs. Researchers say that the hand positioning of dinosaurs has been something of a mystery,

because wrist bones are fragile and not generally well preserved, and much of the positioning is governed by cartilage, which is also not preserved, Holtz said. But "unlike a skeleton, this print was made by a living, breathing dinosaur in its normal operations," he said. "And it clearly doesn't put its palms down, just the edges of its hands" [Los Angeles Times].

Related Content: 80beats: To Attract Mates, This Dino May Have Shaken a Tail Feather 80beats: How Did the Giant Flying Reptiles of the Jurassic Period Take Off? 80beats: Carnivorous Dinosaur With Bird-Like Lungs Discovered DISCOVER: Early Birds or Tiptoes of Tiny Dinosaurs? examines other mysterious prints