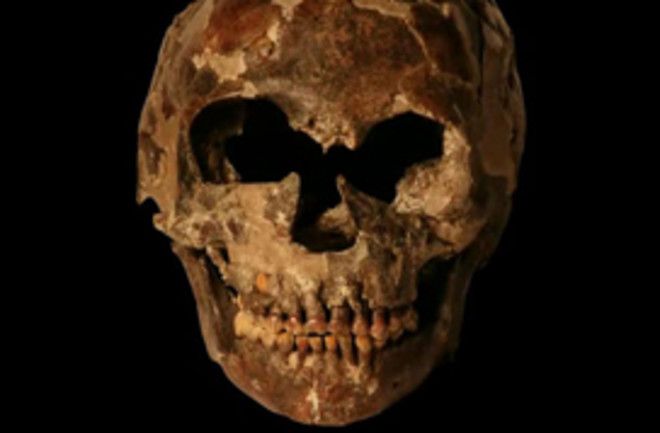 Neanderthals, it would appear, grew up in a big hurry. In a new study in the Proceedings of the National Academy of Sciences this week, Harvard anthropologists who studied Neanderthal teeth samples say that the evidence captured in those teeth show the rate at which they developed. Compared with human children, Neanderthal kids raced though their developing years and into adulthood, the researchers say. Tanya Smith and colleagues used advanced X-ray scans of the tooth fossils of Neanderthals and the humans who lived concurrently with them to discover the layers therein. She says such scans reveal "growth lines" that serve the same purpose as tree rings--they allow researchers to measure the individual's development year by year, and to determine his or her exact age at death.

Even when compared to some of the earliest human teeth, taken from remains of humans who left Africa 90,000 to 100,00 years ago, the differences were clear. Human teeth grew more slowly, pointing to more leisurely periods of youth. "This indicates that the elongation of childhood has been a relatively recent development," the study said. [AFP]

This evidence suggests that the Neanderthal life cycle—with generally shorter lives, shorter gestation periods, and shorter childhoods—was closer to that of primates than the human life cycle with longer childhoods and extended longevity. It's a similar conclusion to the one reached last week by a study

that suggested Neanderthal brains did not become more rounded like humans' as they grew up, but rather stayed in an elongated shape—again, similar to what we see in primates like chimpanzees. But what's so great about growing up slowly? A long childhood, the thinking goes, allows for greater mental development.

"The classic theory is that slowing down childhood may create favorable conditions for allowing this to happen more effectively in modern humans," Smith [says]. "We don't have to deal with the pressures of obtaining social status or bearing offspring as early teenage chimpanzees do, for example." Neanderthals were clearly evolving in the direction of the modern condition with longer development, Smith said. But it's the modern humans who represent a "unique extreme" in terms of having longer developmental periods. [LiveScience]

If one accepts the idea that humans out-competed Neanderthals

, then it makes sense: Evidence has shown they had brains as large or larger by volume than early humans, but perhaps their haste in growing up precluded mental development that would have allowed them to compete with early humans. Slow growth is a risk because it allows more time for misfortune to strike children before they reach childbearing age. But apparently this risk paid off for early humans. As with most conclusions about the Neanderthals, however, this one is not universally accepted. A similar study several years ago

reached the same conclusion about live-fast, die-young Neanderthals, but proposed the explanation that their fast development required more energy, which left them susceptible to food shortages. Besides, not everyone believes archaic humans out-competed the Neanderthals.

Erik Trinkaus, a Neanderthal expert who is a professor of physical anthropology at Washington University in St. Louis, believes that the modern humans who came from Africa had no real edge over Neanderthals when they first spread across Eurasia. At this time in our history, "archaic humans remained across the more northern areas, and even displaced the modern humans in Southwest Asia for an additional 50,000 to 70,000 years," Trinkaus [says]. "It argues for very little adaptive advantage on the part of these modern humans." He and some other anthropologists think Neanderthals and modern humans mated, so the Neanderthals may have simply been absorbed into our own species over time. [Discovery News]