Did Early Humans Migrate Across a Watery, Green Sahara? 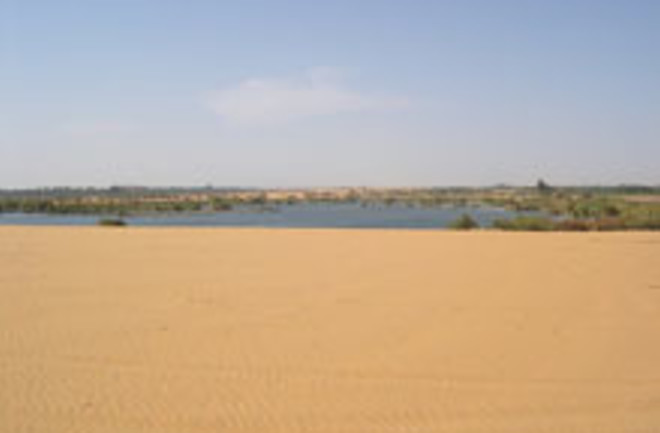 The "cradle of humanity" is thought to be located in Sub-Saharan Africa--meaning below the Sahara, the largest hot desert on earth. So how was humanity able to breach such an intimidating barrier to spread out across the rest of the world? Until now, anthropologists typically argued that hominids could only have followed the lush Nile River valley north in order to reach the Middle East and beyond. But new research is suggesting that the Sahara might not have been an impassable barrier to those humans after all. Some animals (including several fish species) are found on both the north and south sides of the desert, and even in some safe-haven ponds in between. The researchers argue that if these ancestral fish could swim across the region that we now know as the Sahara, humans could have also made it across.

"Fish appeared to have swam across the Sahara during its last wet phase sometime between 10,000 and 6,000 years ago," researcher Nick Drake, a geographer at King's College London, told LiveScience. "The Sahara is not a barrier to the migrations of animals and people. Thus it is possible--likely?--that early modern humans did so, and this could explain how we got out of Africa." [LiveScience]

During this last wet phase, after the end of the last glaciation around 10,000 years ago, the Sahara was a place of rivers, lakes, grasslands, and even swamps. These waterways could have connected central Africa to northern Africa.

That connection appears to have been sufficient to allow species, including fish and mollusks, to spread. "25 North African animal species have a spatial distribution with population centers both north and south of the Sahara and small relict populations in central regions," the authors note. [Ars Technica]

While 10,000 years ago is extremely recent in terms of human evolution, the researchers suggest that if the Sahara was wet enough to support fishy and human migrations at that time, it could also have allowed earlier migrations around 125,000 and 100,000 years ago. The authors of the paper, published this week in the Proceedings of the National Academy of Sciences, argue that ancient humans could have traversed these waterway out of Africa, instead of (or in addition to) the alternate hypothesis that they traveled through the more stable Nile basin or along the coast.

The authors are very cautious about concluding that, because these corridors existed, they must have been used. The Nile and coastal migrations still remain possible, if controversial options, and the precise timing of the appearance of modern humans in the Mediterranean basin is still uncertain. [Ars Technica]

Related Content: 80beats: A Solar Power Plant in the Sahara Could Power All of Europe

80beats: Stone-Age Graveyard in the Sahara Recalls an Era of Lakes and Wetlands

Gene Expression: Out of Africa: mend it, don’t end it!

DISCOVER: Out of Africa, All of Us

DISCOVER: Swimming in the Sahara

DISCOVER: Each Grain of Sand a Tiny Work of Art