Did Dinosaur Eggs Lead To Their Doom? 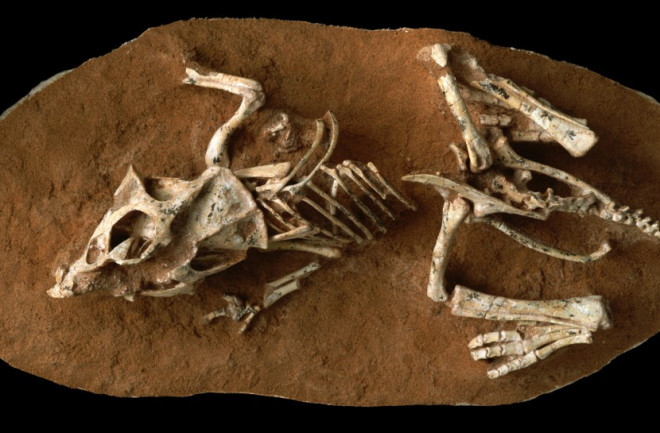 Embryonic Protoceratops andrewsi (like the hatchling above) may have a key to the dinosaurs' doom written in their teeth. Credit: AMNH/M. Ellison. For the first time, researchers have been able to peer into fossilized dinosaur eggs at such a crazyfine resolution that they've spotted growth lines on the embryo-dino teeth. The marks, called von Ebner lines, tell a surprising story that may help to explain why non-avian dinosaurs were wiped out some 66 million years ago. Published today in the Proceedings of the National Academy of Sciences, the research focused on well-preserved fossilized eggs from two species of dinosaur: Protoceratops andrewsi, a four-on-the-floor herbivore that was about the size of a large dog as an adult, and Hypacrosaurus, belonging to the duck-billed dino tribe and significantly larger, about 30 feet in length at maturity. Both species lived during the Late Cretaceous, that last gasp of dino glory before their extinction. The two dinosaur eggs were chosen partly because of their great state of preservation but also because of their size disparity: The Protoceratops specimen weighs less than half a pound while the Hypacrosaurus egg is a hefty 9 pounds or so. The researchers hoped to generate a range of incubation time by using eggs (and species) of different sizes.

Researchers used CT scans to generate detailed images of the jaws of the embryonic dinosaurs in the eggs, and then studied the dentine layer of the embrydino teeth in search of von Ebner lines. The growth lines, present in all animals with teeth, form daily during development. They're like high-speed tree rings, only for teeth. And — woot! woot! — the team found the von Ebner lines! That in and of itself is exciting, because it's never been done before, but the real kicker is what the lines revealed.

The von Ebner lines charting daily growth show up clearly in the dentine of a tooth belonging to a dinosaur embryo — Hypacrosaurus, to be exact. Credit: G.M. Erickson.

Paleontologists have long thought that the incubation period for dinosaur eggs was similar to that of modern birds which are, after all, the only dinosaurs still around. Modern bird incubation periods range from a little more than a week to just under three months. Based on the von Ebner lines revealed in the new study, however, dinosaur eggs appear to have incubation periods of three to six months — a lot longer. So what, you might be saying, because you're a callous person who only reads dinosaur stories in hopes of hearing someone has managed to clone one (dream on, buddy!). Well, the more time you're sitting in an egg waiting to be born, and the more time one of your parents is sitting on you and your siblings keeping you warm, that's time both adult and embyro are vulnerable to predation and nasty environmental surprises such as floods wiping out the nest. It's also time lost for the parents that could have been spent rearing other young and/or prepping for the next batch o' babies if you know what I mean. (Dino Parent A: "Honey, let's have a date night and go check out that new lagoon everyone's raving about!" Dino Parent B: "Oh, dear, you know I've got to sit on these eggs for another three moons." Dino Parent A: "We never have time for us anymore, to just talk about our dreams and hopes and feeli-GAAAAAAAAAH!" Dinosaur C: *Burp.*) Speedy Birds (Not the Roadrunner) Modern birds have a particularly fast incubation period among all egg-laying animals, which improves overall survival rates and makes for a more efficient life cycle. Now that we know non-avian dinosaurs apparently do not share that speedy cycle (surprise!), researchers think it might explain why they were wiped out at the Cretaceous-Paleogene boundary. You see, birds and mammals and a lot of other animals made it through the end-Cretaceous mass extinction. Though many species were wiped out and many more experienced a dip in numbers, animals with more efficient, adaptable life cycles — say, birds with speedy incubation periods or mammals able to stay on the move while gestating — had an advantage that dinos apparently did not. Today's research, while exciting and a huge advance for the study of dinosaur development, comes with a big asterisk. Well-preserved dinosaur eggs are few and far between, and both of the embryos studied belong to ornithischian dinosaurs, essentially the cows and sheep of their day, which split from the mostly meat-eating theropods very early in dinosaur evolution (230 million years ago, give or take). If the researchers were able to get their hands on the embryo of a dinosaur much more closely related to birds, or even just any old theropod, they might find von Ebner lines that point to bird-like incubation. Anyone know where we can get our hands on such an embryo?