Delay not deviance: brains of children with ADHD mature later than other

This article is reposted from the old Wordpress incarnation of Not Exactly Rocket Science.

Attention-deficit hyperactivity disorder is the most common developmental disorder in children, affecting anywhere between 3-5% of the world's school-going population. As the name suggests, kids with ADHD are hyperactive and easily distracted; they are also forgetful and find it difficult to control their own impulses.

While some evidence has suggested that ADHD brains develop in fundamentally different ways to typical ones, other results have argued that they are just the result of a delay in the normal timetable for development. Now, Philip Shaw, Judith Rapaport and others from the National Institute of Mental Health have found new evidence to support the second theory. When some parts of the brain stick to their normal timetable for development, while others lag behind, ADHD is the result. The idea isn't new; earlier studies have found that children with ADHD have similar brain activity to slightly younger children without the condition. Rapaport's own group had previously found that the brain's four lobes developed in very much the same way

, regardless of whether children had ADHD or not. But looking at the size of entire lobes is a blunt measure that, at best, provides a rough overview. To get an sharper picture, they used magnetic resonance imaging

to measure the brains of 447 children of different ages, often at more than one point in time. At over 40,000 parts of the brain, they noted the thickness of the child's cerebral cortex, the brain's outer layer, where its most complex functions like memory, language and consciousness are thought to lie. Half of the children had ADHD and using these measurements, Shaw could work out how their cortex differed from typical children as they grew up. A child grows, their experiences manifest as connections between nerve cells and their cortex thickens. But during adolescence, the developing brain values efficiency over expansion and the cortex starts to thin, as unused connections are mercilessly trimmed

. The growth of a child's brain into a teenager's is like the pouring of a block of clay that can then be sculpted away into the refined adult version. In both groups of children, parts of the cortex peaked in terms of thickness in the same order, with waves of maturity spreading from the edges to the centre. The pattern was the same, but the timing wasn't. 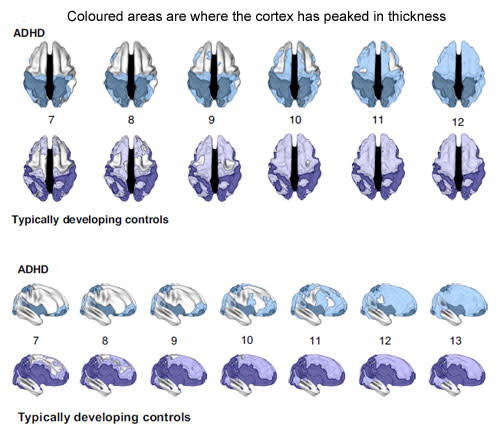 On average, the brains of ADHD children matured about three years later than those of their peers. Half of their cortex has reached their maximum thickness at age 10 and a half, while those of children without ADHD did so at age 7 and a half; you can see an evocative Quicktime video

of this happening online. According to these results, ADHD is a disorder of delay, not deviance. These delays were most pronounced in the lateral prefrontal cortex

, where the lag time was as high as 5 years (the diagram on the right shows parts of the brain that matured with the most delay). These parts of the brain are responsible for suppressing inappropriate thoughts and actions, directing attention, short-term memory and controlling movement. All of these are tasks that children with ADHD can find difficult and other studies have found that as they try, their prefrontal cortex shows less activity than expected for a child of the same age. The only part of the brain that matured faster in children with ADHD was the primary motor cortex

, which helps to plan and control movements. It also takes orders form the prefrontal cortex and if one matures early and the other matures late, this might explain several hallmarks of ADHD, including restlessness, fidgeting and uncontrolled hyperactivity. Like much good research, Shaw's study raises more questions than it answers. For the moment, the most pressing one is: what causes the delay? From his data, Shaw rules out Intelligence and gender, and thinks that prescribed drugs are unlikely to have an effect either. Genes are almost certain to have an influence though and Shaw has his eye set on genes that produce a group of proteins called neurotrophins

. These control the growth, division and survival of neurons, and changes in some of their genes have already been linked to ADHD. Shaw's results should also be encouraging for many families, and they explain why so many children eventually grow out of the condition - as lagging brains catch up, the symptoms of the developmental lag might disappear. But it will be interesting to see if the timing of development at specific parts of the brain relates to a child's chances of recovery. We'll only know that if scientists run larger studies where the brains of children with ADHD are regularly scanned over a long period of time. Studying the speed at which a child's cortex matures could also shed light on other mental conditions. For example, autistic children show the opposite pattern to those with ADHD - their cortices mature much earlier than those of their peers. On the other hand, the cortices of children with exceptionally high IQ