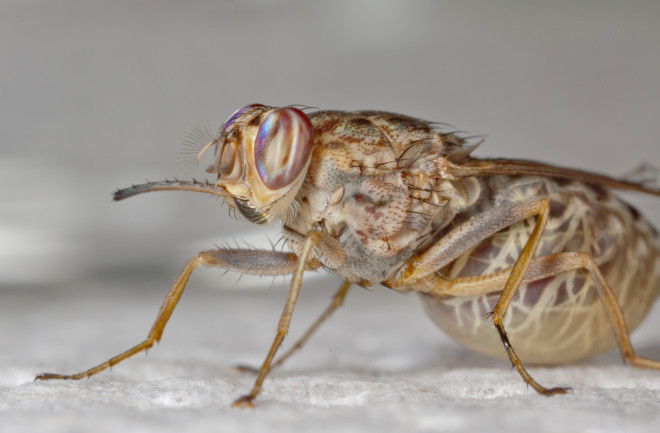 A pregnant female tsetse fly. Credit: Geoffrey M. Attardo The pestilent tsetse fly is a scourge in rural Africa. Its bite transmits the parasite that causes sleeping sickness, a potentially fatal disease, to tens of thousands of Africans per year. Presently, insecticides and simply minimizing contact with the bloodsucking insects are our only tactics to prevent the spread of sleeping sickness. However, scientists have this week unlocked a new way to combat the spread of the disease: the fly's genome. Scientists announced Thursday that they have completed a ten-year project to sequence the genome of Glossina morsitans, one of several tsetse species. In doing so, they’ve exposed several genetic weaknesses that could lead to development of more effective insecticides, traps and repellants.

Tsetse flies are a bit strange: They give birth to offspring similarly to mammals. A single tsetse larva grows inside its mother’s uterus and nurses on a milk gland until it’s ready to be birthed. When that magical day arrives, the mother pushes out a single wriggling larva that’s almost as large as she is. Females will typically give birth up to 10 times in their lifetimes. Among their bounty of genes, scientists identified a protein called ladybird late that controls milk production. They found that if they disabled the gene for ladybird late in a mother fly, her larvae starved to death. Therefore, developing a chemical to disable ladybird late could give humans the upper hand in managing tsetse fly populations.

Scientists also identified genes for proteins that help tsetse flies conserve water and extract water from their blood meals. Knocking out these proteins could disrupt the flies' ability to digest their food, which, in turn, would disrupt reproduction cycles due to malnutrition and lack of energy. Genes for the fly's vision could also yield new and better traps. The insects are known to be attracted to blues and blacks, but now that scientists have found the genes associated with color perception, they can find the shade of color that best attracts the flies, National Geographic reports. The scientists’ findings were published Thursday in Sciencealong with 11 additional papers in PLOS journals. It's an oft-repeated battle strategem to “know thine enemy.” Now, armed with genetic knowledge, we know the tsetse fly more deeply than ever before — good news for those on the front lines of battling this disease.