Debates Over Evolution and Creationism Are Headed for the Islamic World 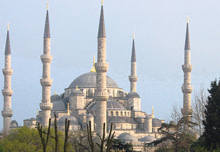 The battle that has raged over creationism and evolution in the United States is likely to spread to the Islamic world, a scholar of science and religion argues in a new essay. But author Salman Hameed writes that the opening of a new front in the battle gives scientists an opportunity to reframe the debate.

Better education, the spread of Internet access and news about U.S. controversies over evolution are provoking some Muslims worldwide to start to ask whether Islam is compatible with evolutionary theory, Hameed said. "Now is the time that these ideas are going to be solidified. We can shape it. There are positive ways to shape these ideas in which we can avert a mass rejection of evolution," Hameed said [LiveScience].

The most fundamentalist form of creationism in the United States is based on a literal reading of the Bible, which implies that the earth and all its creatures were created by God in their present form over the course of six days; creationists say this narrative is in direct conflict with the idea that organisms slowly evolved over billions of years. However, Hameed notes that the Koran may be more compatible with evolutionary theory.

One of the big evolution problems from the US creationist perspective is the age of the Earth. Logically speaking, if you believe in a 6000 or 10,000 year-old Earth, then you have to reject evolution. In the Muslim countries, young Earth creationism is nonexistent. The Koran is very vague about creation stories, specifically regarding the creation of the universe. If you accept an old Earth, then it makes it relatively easier to accept evolution [New Scientist].

In his essay in Science [subscription required], Hameed explains that evolution is taught in high schools in many Muslim countries.

Still, today, only 25 percent of adults in Turkey agree that human beings developed from earlier species of animals, whereas 40 percent of people in the United States agree with this scientific fact, Hameed writes. And Turkey is one of the most secular and educated of Muslim countries [LiveScience].

He worries that evolution is becoming increasingly linked with atheism in the Islamic world, and it also sometimes viewed as a symbol of Western ideas and imperialism. Hameed says these association may cause many people to reject evolution out of hand. No discussion of creationism in the Islamic world would be complete without a mention of Adnan Oktar, the wealthy Turkish autodidact who self-publishes glossy books that he claims disprove evolution, and has sent them, unsolicited, to thousands of academics and media outlets in Europe and the United States. Oktar has also feuded with Richard Dawkins, the British proponent of evolution and atheism: Oktar

successfully brought a case against Mr Dawkins to a Turkish court, claiming that his website contained blasphemous and defamatory content. Internet users in Turkey can no longer access the site [The Scotsman].