Death From Below: Invasive Lionfish Lurking in Deep Reefs, Sending Hungry Reinforcements to the Shallows 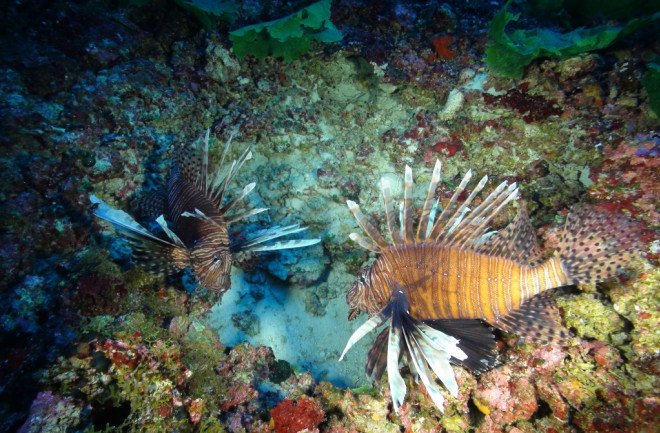 Lionfish on a mesophotic reef off Florida. Photo credit: Mike Echevarria, Florida Aquarium via NOAA In the last few decades, scientists have come to appreciate the incredible creatures living on the reefs that lie just below conventional diving limits in what is called the mesophotic zone. These incredible biodiversity hotspots are home to more endemic species than shallower reefs, and conservationists are hopeful they may serve as refuges—pockets of relatively pristine habitat out of reach of anthropogenic stressors—where species under threat from pollution, overfishing, and even the effects climate change can hang on while we clean up our act. In a new paper published today in Royal Society Open Science, scientists have added to growing evidence that these ecosystems do serve as refuges—unfortunately, in this case, they're harboring large, fertile adults of exactly the wrong species: invasive lionfishes. Lionfishes are arguably the worst marine invasive species out there, and have found their way from their native waters of the Indo-Pacific into the Mediterranean, Caribbean, and Atlantic. In their invasive habitats, these flamboyantly venomous predators grow unchecked, eating their way through naive locals with seemingly gluttonous glee. Because of their devastating effects on ecologically and economically important fishes, our species has waged an all-out war on these unwanted invaders. Communities across the invasive ranges of these fishes enlist skin and SCUBA divers to cull lionfish by the thousands, hoping that removal efforts will stem the growth of their populations. But a new study suggests that such efforts are doomed to fail, as the biggest breeding fish are safely hiding out of reach of our spears at mesophotic depths. https://vimeo.com/116282275 It's not news that lionfish live in the dark, cold depths. Studies published in 2011, 2014 and earlier this year have documented the existence of lionfish on mesophotic reefs. Their mere presence in these habitats, which are home to many species found nowhere else as well as commercially important stocks, is deeply concerning. But it has not been clear whether deep-dwelling lions found their way to the depths and remained there, creating a population isolated from their brethren above, or whether lionfishes move through shallow and deep habitats in their lifetimes. To better understand the nature of deep reef lionfishes, scientists from Oxford University surveyed lionfish populations on the shallow reefs around Utila Island, Honduras—where lionfish are intensely speared—as well as deeper reefs around the island from 20-85 meters (~65-280 feet) and shallow reefs in Tela Bay, Honduras, where lionfish flourish untouched. They calculated lionfish density and collected individuals to determine their diet, size and overall health, and whether they were actively breeding. The researchers also took note of whether the fish displayed avoidance behaviors, measuring the lionfish alert distance on all reefs regardless of whether spearfishers regularly remove lionfish there.

In the shallows around Utila, down to about 80 feet, the scientists couldn't find any lionfish—evidence that the proactive culling efforts are paying off, at least in the short term. But as soon as they went beyond the depths of regular removals, the lionfish were easy to find, and became more and more abundant. Lionfish were also bigger at depth, and more reproductively active; a whopping 25% of female lionfish caught at mesophotic depths were actively spawning. That means the big, old fat female fish (BOFFFs

)—those that contribute most to population growth—are living at depth, out of reach of culls. And no matter where the lionfish were caught, they were eating the same thing: fish, mostly. Already, these results are upsetting because they suggest that while regular removals might be protecting shallow fish species from these voracious predators, they're doing nothing for the vulnerable species that reside at depth, and deep-dwelling lions are happily eating and breeding as if we didn't exist. But the news gets worse. When the scientists compared the animals' behavior between the targeted shallow reefs, the untargeted deep reefs below them, and the untargeted shallow reefs of Tela Bay, they found that the fish at depth acted like the fish in the culled shallows, running from people at distances 400% greater than individuals from the untouched reefs. That suggests the deep lions knew to be afraid; even though they now live beyond the reach of conventional divers, they were more fearful than shallow fish that had never experienced spearfishers. Which in turn means that although they were safe now, these deep lionfish living on reefs below culled sites probably spent part of their life in shallower waters and learned to avoid people with spears. While the results aren't conclusive, they tell a disheartening tale. Combined, they suggest that young lionfish live in shallow habitats, and as they grow, they move deeper and deeper, finally residing in the dark depths of the mesophotic zone. There, they eat, and eat, and breed, sending their eggs and larvae back up to the shallower reefs to settle and begin the cycle again. Since removal efforts only have the chance to be effective when the largest, most fecund fish are removed, mangers are fighting an endless, losing battle—the moment they stop killing lionfish in the shallows, the BOFFFs in the deep will replenish shallow populations with new recruits. There is a silver lining, though: armed with the knowledge of how important it is to remove lionfish from mesophotic ecosystems as well, managers can ramp up efforts to create effective ways of removing deep-dwelling lionfish. Engineers are already hard at work

, innovative ideas are being transformed into technological solutions that just might be able to rid deep reefs of invasive lionfishes at the same rates low-tech spears remove them from shallower sites.

One of NOAA's lionfish traps in action. Gif courtesy of NOAA