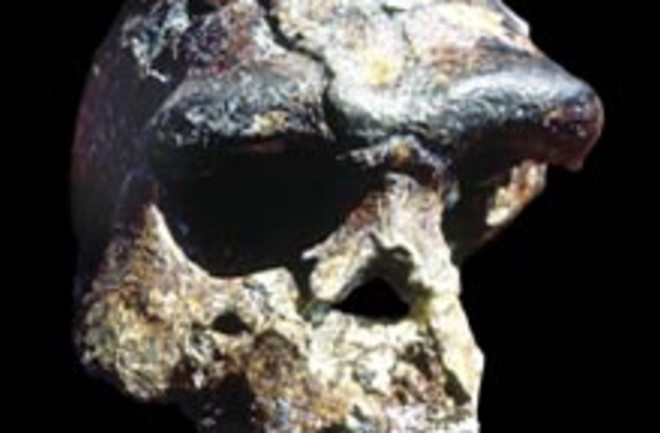 A clever and painstaking new analysis has revealed that the famous Homo erectus fossil known as Peking Man is 200,000 years older than previously thought. The fossil, discovered almost a century ago during excavations of the Zhoukoudian caves near Beijing, is now thought to be about 750,000 years old.

The revised date could change the timeline and number of migrations of the Homo erectus species out of Africa and into Asia [LiveScience].

Homo erectus were the first hominids to leave the evolutionary cradle of Africa.

The species had a distinctive barrel-shaped torso and stood [57 to 70 inches] tall, walking upright in a similar way to modern humans [Nature News].

Researchers had previously suggested that one wave of Homo erectus wayfarers migrated out of Africa between 2 million and 1.6 million years ago, settling Indonesia and southern Asia first before moving northward. But new fossil discoveries, coupled with the new dating of Peking Man, are forcing paleoanthropologists to rethink this scenario.

In a comment accompanying the new study, [anthropologist Russell] Ciochon and Iowa geologist Arthur Bettis III hypothesize that H. erectus populations in or just outside of Africa took two separate routes eastward into Asia. Ciochon and Bettis propose that an initial migration followed Asia’s southern coast to Java, which was at the time connected to the mainland. Later, H. erectus passed through central Asia and southern Mongolia to reach the Zhoukoudian vicinity [Science News].

Researchers also note that a huge swath of primeval forest separated the two populations, which they say supports the double-migration theory. For the new study, published in Nature, researchers used a dating method that relies on the impact of cosmic rays on aluminum and beryllium isotopes in minute quartz grains. The isotopes decay at a known rate when they're exposed to cosmic radiation on the earth's surface, but the decay halts when sediment buries the quartz grains. The researchers had to separate the white quartz crystals that had been buried at the same time as the fossils, and make sure they weren't studying more recent, gray crystals that had been washed in later. This meant tedious grain-by-grain examination of sediment. One student working for eight hours could only isolate two grams of quartz, [ study coauthor Guanjun] Shen says. Because 60–100 grams is needed for each test, Shen says: "I had to mobilize my students to work for weeks, work not so easily conceivable by my US collaborator." But the work paid off.

"This is a catalyst for a new era of re-dating," says palaeoanthropologist Russell Ciochon [Nature News]

, who was not involved in the research. Related Content: 80beats: First “Out of Africa” Migrants Were Mostly Male 80beats: Did Innovative Stone Tools Spur the First Human Migrations? 80beats: Ancient Waterways Could Have Guided Early Humans Out of Africa DISCOVER: Did Humans Colonize the World by Boat?Image: copyright Russell L. Ciochon, Univ. of Iowa