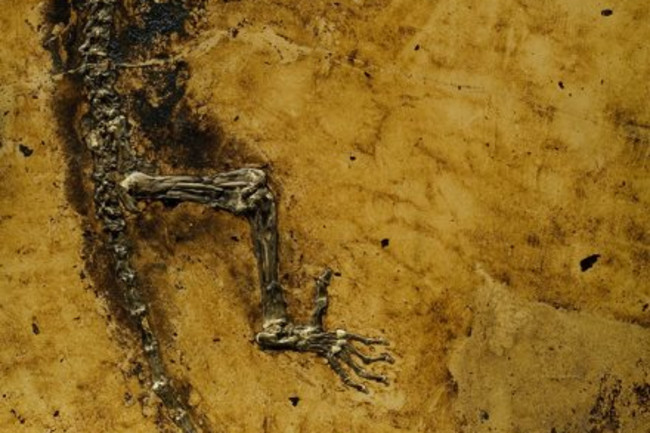 If the world goes crazy for a lovely fossil, that's fine with me. But if that fossil releases some kind of mysterious brain ray that makes people say crazy things and write lazy articles, a serious swarm of flies ends up in my ointment. On Friday, a reporter at the Wall Street Journal got a scoop on a new paper on a 47-million-year-old primate fossil that was published today in PLOS One. The story mentioned that the discovery would be revealed at the American Museum of Natural History. It did not mention that the fossil was also the ceneterpiece of a show on the History Channel, along with a big web site and a book--all called "The Link. Yesterday and today there have been a torrent of news articles on the new primate, dubbed Darwinius masillae. Publications that normally wouldn't give two picas to paleontology, such as New York Magazine and Gawker jumped on the bandwagon. So what made this primate worth all the attention? Well, reporters who attended a press conference this morning heard things like this (courtesy of the Guardian)

Nancy Dubuc of the History Channel that will be showing the film said Ida "promised to change everything that we thought we understood about the origins of human life"....Dr Jorn Hurum, the scientist at the heart of the project, made the most exotic parallels. He screened photographs of the Mona Lisa and the Rosetta Stone, without elucidation, though the implication was clear. He variously described the fossil as the Holy Grail of paleontology and the lost ark of archeology.

I watched this media event balloon as I tried to do other work, but I kept getting distracted. I kept waiting to see an article that sought out some opinions from experts who were not involved in the discovery and analysis of the fossil, which might corroborate that this was indeed the Holy Grail of paleontology, or perhaps something just a wee bit more Earthbound than that. I never found one. It finally got to the point where I found myself dispatching emails to two prominent primatologists--John Fleagle of SUNY Stony Brook and Chris Beard of the Carnegie Museum--to see what they thought. Both researchers agreed that it was a lovely fossil, in terms of its exquisite preservation. "It's really wonderful," Fleagle said. It's got bones, fur, and even its last meal in its stomach. Fleagle observed that it will be possible to learn many details about the biology of early primates from Darwinius, down to the stages by which it teeth erupted. But does this "change everything"? Is it, as the Sun claims, "the missing link in human evolution"? Actually, I didn't ask Beard or Fleagle those questions. That would be a bit ridiculous. No scientist, including the co-authors of the Darwinius paper, would ever pretend that they had found a single fossil that was "the" missing link. For some reason reporters (and apparently television producers) are obsessed with the idea, as I wrote about long ago when another primate fossil was touted in a similar fashion. Newly discovered fossils are important instead in helping to resolve the order in which traits evolved, and how groups of species are related to one another. And the more fossils that are discovered, the clearer these pictures become. Instead, I asked what Fleagle and Beard thought about the actual argument in the paper, which has to do with where humans, apes, and monkeys (known as anthropoids) fit in the primate family tree. Some of the co-authors on the new paper have argued in the past that an extinct group of primates called adapiforms gave rise to anthropoids. Others have favored a common ancestry with small primates known as tarsiers. (Laelaps has a nice history of the debate.) The authors of the new paper argue that Darwinius is an adapiform, but it also has traits that link it with anthropoids. So, according to them, it's an early relative of our own anthropoid lineage. Both Fleagle and Beard were not impressed with this argument. Fleagle observed that, ironically, most of the evidence presented in the paper is old news. Except for the ankle and a few other traits, most of the traits offered to link adapiforms to anthropoids "have been known for decades," said Fleagle. It's nice to have those traits all in one primate fossil, but they don't advance the debate. Fleagle is intrigued by the anthropoid-like ankle of the fossil, but he also notes that it's "roadkill," flattened down to a 2-millimeter pancake. He wonders whether their interpretation of the ankle will hold up to scrutiny. Beard has similar things to say via email.

I've been deluged today by journalists regarding this. It is a marketing campaign for the ages. The fossil is nice because it is so complete, but it is a rather vanilla-flavored adapiform that does not differ appreciably from other members of that well-known group of Eocene primates...

Beard was also puzzled that the authors did not compare Darwinius to an important early anthropoid fossil Beard found, known as Eosimias. In fact, he was underwhelmed by the entire comparison of Darwinius to other primates (a phylogenetic analysis):

The phylogenetic analysis is not very complete, and I would certainly interpret many of the characters they do cite very differently than they do. But one of the most shocking things of all about the technical paper is that they found room to cite 89 references, but there is not one mention of Eosimias to be found there. This is bizarre indeed. In a paper that purports to tell us something about anthropoid origins, the authors have conveniently ignored the single most significant fossil that has been published to date. Incomprehensible.

We certainly haven't heard the last of Darwinius--on that, even the critics agree. But let's hope that we've heard the last of the Holy Grail. [Title from the great Tom Waits: lyrics, video] [Image: PLOS One] Update: In response to comments from Kilian and Brett, I thought I'd add a little more detail here on the evolutionary relationships the authors argue for in the paper. Scientists have long split the primate order into two suborders: strepsirrhines and haplorhines. Strepsirrhines included lemurs, galagos, and a few other species, which all share certain traits, such as a wet nose (the root of the name strepsirrhine). Monkeys, apes, and tarsiers are typically included in the Haplorhines. The Darwinius team argues that their new fossil, Darwinius, is more closely related to haplorhines (which includes monkeys and apes) than it is to strepsirrhines. Therefore, it (and other adapiforms) are ancient relatives of monkeys and apes. Brett wondered whether there was a tree in the paper. There is, and thanks to PLOS's open access policy, I can post it right here: 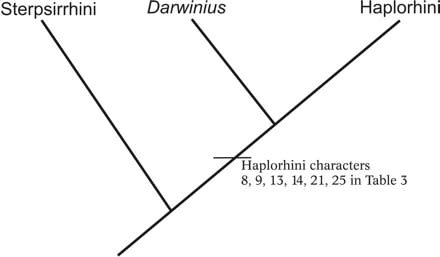 A couple points here: 1. They need to fix the typo in Strepsirrhini. 2. This is what Beard would call "not very complete." Three branches makes for a pretty bare tree, especially when you consider that there are a fair number of early primate fossils known at this point. Fleagle pointed out to me that there are some early anthropoid fossils that lack some of the traits that supposedly join Darwinius to anthropoids. This could all be sorted out with a detailed phylogenetic analysis, which no doubt someone will carry out. The authors of the study get kudos from Fleagle for providing so much anatomical detail and high-resolution images of the primate, because that will enable lots of scientists to take their own stab at placing Darwinius in the primate tree.