Dark Life Beneath the Ocean's Crust 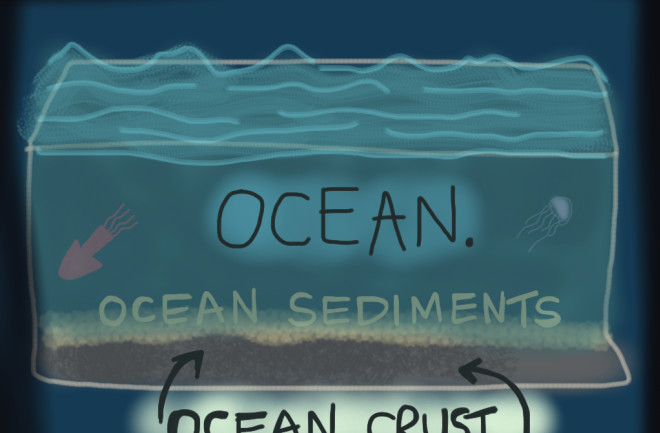 A few years back, scientists discovered that the ocean crust, previously considered a thick layer of lifeless rock that covers 60% of the Earth’s surface, actually contained some microbes. But the extent of the microbial ecosystem in the crust was unclear until a study published recently revealed that the “dark biosphere” in the ocean crust might be one of the biggest ecosystems on the planet. As creatures of the light we may find this hard to imagine, but evidently much of our biosphere is in the dark.

Scientists sampled in 2004 near the Juan de Fuca Ridge, off the coast of Washington, which is a spreading center where hot lava wells out of the Earth and creates new basalt rock. Seawater circulates through 3.5-million-year-old crust.

Lots of different bacteria were present in the crust but the team focused on methane-producing and sulfur-reducing species. These microbes get their sustenance from inorganic molecules created during the chemical reaction between water and rock. DNA evidence indicates these are modern organisms, not fossils.

Professor Lever, careful to prevent contamination during sampling, raised the bacteria in a lab at UNC for five years after the sampling. The lab-raised bacteria released methane, another bit of evidence for an active crustal community. Thus, he concludes, even the deeper, buried parts of the Earth's crust are home to living creatures.

It’s important to note that not all parts of the ocean crust have this community. But in the areas that do, these bacteria converting carbon to biomass might be providing a massive carbon sink impacting the global carbon cycle. They also might influence the water cycle, since 4 percent of the ocean’s water is circulated through basalt rock. Professor Lever thinks basaltic crust is likely one of the earliest hospitable environments on the Earth to support life.

This research could also shed light on the habitability of other planets, such as Mars, which have no oxygen. Rocks on Mars are iron rich, so there could be similar geochemical reactions to the ones seen in Earth's crust.