Crowdsourced Science: 5 Ways You Can Help the Hive-Mind

Today DISCOVER blogger Ed Yong reports on a project called Foldit, in which citizen scientists playing a slick computer game helped to unravel the complex structure of proteins, and in doing so got the game into the prestigious journal Nature. There are plenty of great ways for non-professional scientists to help out scientific projects. DISCOVER previously brought you the ways to donate your computer's free time to projects like SETI@homeand Stardust@home. But what if you want to use your own brainpower in the aid of science? That can be arranged, as there are plenty of more active ways to contribute to crowdsourced science. 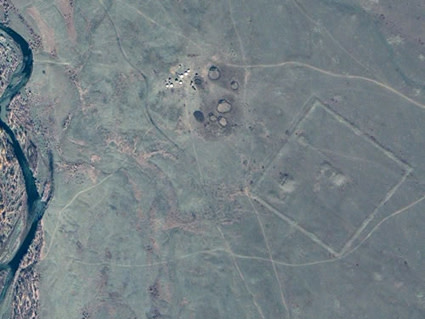 1. Mapping the place where Genghis Khan was buried This summer archaeologist Albert Yu-Min Lin led an expedition to Mongolia in search of the lost tomb of Genghis Khan—but not before putting out the call for a little help. Lin's team provided high-resolution satellite photography of the area they plan to survey. On the mission's website, volunteers can sign up to scan the images for anything that could help the team on its quest: roads, rivers, or perhaps even the outlines of where long-gone structures once stood centuries ago. 2. Amateur Martians As we noted yesterday with the Spirit rover's apparent demise, the rovers and orbiters NASA has sent to Mars have been a smashing success. The only problem is, those robot explorers have sent home more data than NASA's people can map on their own. You can help: Play "Be a Martian," a game set up through the Jet Propulsion Lab. Players earn points and badges by finding the most interesting martian craters for study, or by matching up high-resolution images of the red planet's surfaces to wider photos taken from above—thereby improving maps of Mars. 3. Fixing that little oil spill down south With a temporary cap in place and the more permanent "static kill" and relief well measures on their way, we hope that BP is on the cusp of shutting down its oil leak into the Gulf of Mexico for good (fingers crossed). But even if they succeed, the gargantuan task of cleanup remains. You can help. When BP asked the public to submit ideas for fixing the spill, it got 300,000 responses. Certainly many were kooky, but as the DISCOVER blog The Intersection noted, one proposed scheme seems very similar to the container cap on the leak now. And the X-Prize foundation, which offers multi-million dollar prizes for things like the best lunar craft or high-mileage car, said it would consider such a lucrative prize for the right idea to clean up BP's mess. If you're no Kevin Costner and don't have an oil cleanup machine in your garage, scientists still could use some help in the long recovery that's only just beginning. One man, Drew Wheelan of the American Birding Association, sought help this summer to count the ghost crabs on the Gulf Coast, which are imperiled by the oil but harder to count than turtles or birds. 4. reCAPTCHA

You might have already helped reCAPTCHA without even knowing it. The project, started in 2008 and acquired by Google last year, is helping to digitize old documents like books and The New York Times archive by using talents you have that computers don't. CAPTCHAs are those squiggly letters and numbers that websites ask you to interpret to prove you're not a spambot. And the degraded text in old newspapers tends to look a little like CAPTCHAs, making it difficult for computers to digitize them. So, when computers can't figure out a word, they ask us. The word or phrase is put into a CAPTCHA, where humans read it with 99 percent accuracy. 5. Galaxy Zoo - classifying galaxies (and more) Computers have a hard time understanding messy old letters running into each other, and they have a hard time understanding messy old galaxies running into each other, too. The people behind the Galaxy Zoo project want to understand galactic collisions, and how those collisions helped to provide the variety of galaxy types we see across the universe. So the system shows a volunteer an real image of two galaxies merging into one, surrounded by my computer-simulated images of different types of galactic smash-ups. You, the volunteer, choose the closest match. And when person after person does this with galaxy collision after galaxy collision, a better view of the universe's evolution comes into view. Galaxy Zoo volunteers have already turned up a new kind of galaxy, called "green pea" for its appearance. Professional astronomers alone probably couldn't have scanned enough images to notice this, and computers' talents aren't well suited to spotting these oddballs. We humans notice a surprise.