Crickets forewarn their offspring about predators before they're born

Mothers can teach their children much about the world, but some mothers can do it without ever meeting their young. Take the field cricket Gryllus pennsylvanicus. A female cricket isn't exactly a caring mother. Once she lays her eggs, she abandons them to their fate. But amazingly, she can also forewarn her young of the dangers they might face. If a pregnant female is exposed to a wolf spider, her experiences affect her unborn young. When they hatch, the baby crickets are more likely to freeze when they smell wolf spiders nearby. 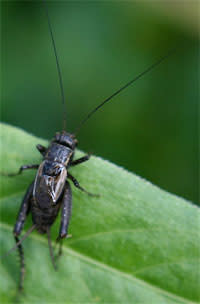 If mothers sense a threat in their environment, there are clear advantages in being able to prepare her young to face those threats. Over the last decade or so, scientists have discovered that many animal and plant mothers do exactly this, even before their young are born. If pregnant water fleas are exposed to the smell of a predatory midge, they produce young that are armed with larger "crowns-of-thorn", defensive spiky helmets that make them difficult mouthfuls. In the same way, aphids produce more winged offspring if they sense danger. Even the humble radish can generate a generation with sharp, spiky hairs.

In all of these examples, the adaptations are physical ones. The case of the crickets, documented by Jonathan Storm and Steven Lima at Indiana State University, is the clearest example yet of mothers preparing their young for life by influencing their behaviour. Physical defences wouldn't do much good here, for even the largest of crickets are easy pickings for spiders.

Storm and Lima bred crickets that had never seen a wolf spider before. They placed pregnant females in cages with wolf spiders whose killing fangs had been disabled with wax. After a while, the females were removed and allowed to lay their eggs. Storm and Lima collected the hatchlings and placed them in plastic arenas lined in paper saturated with the faeces and silk lines of wolf spiders.

Compared to youngsters born to naive mothers, those born to females with experiences of spiders were 27% more likely to freeze when surrounded by their silk or droppings. If the arenas were lined with clean paper, or paper saturated with cricket odours, the youngsters didn't behave any differently - it was only the spider smells that kept them still.

This small difference in behaviour often meant the difference between life and death. Storm and Lima placed the young crickets in naturalistic environments, complete with hiding places. When spiders were introduced, the forewarned youngsters spent about twice as long in their refuges and they survived for much longer.

The same thing happens in the wild. Storm and Lima collected pregnant female crickets from areas where wolf spiders are known to prowl, and others that are free of these hunters. Just as in their lab experiments, the hatchlings were more wary of spidery smells if their mothers lived in areas where spiders roamed. And it's clearly the mother's experiences that change her offspring's behaviour. When Storm and Lima exposed the eggs or nymphs of naive females to the scent of spiders, the youngsters' behaviour weren't affected.

Predators are likely to pose constant threats to a prey species from generation to generation. As such, Storm and Lima think that these sorts of pre-natal parental tip-offs should be fairly common in nature. It's just that we haven't looked very hard for them yet. In other possible examples, pregnant skinks that smell snakes on the air produce young that flick their tongues out more often when snakes around.

For now, we don't know how the mother crickets manage to tip off their young. Their behaviour could be changed through "epigenetic" means, by adding molecular tags onto their DNA that change the way specific genes are used and controlled. A mother could also convey information to her unborn young with hormones. By placing the right balance of hormones into her eggs, she could influence the development of her offspring's defensive behaviour.