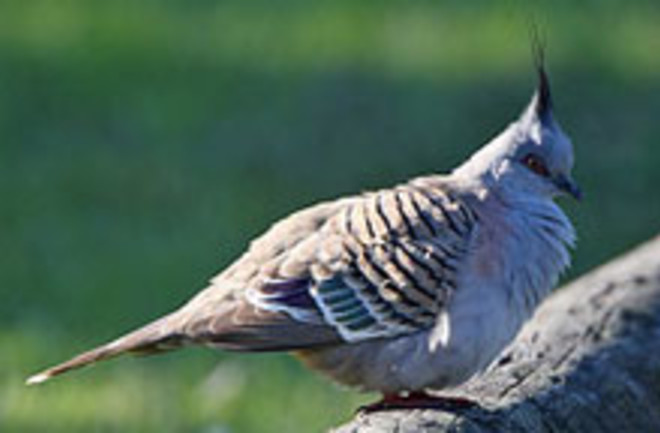 Pigeons alert their flockmates to impending danger not through vocalization, but by making a whistling sound with their wings as they take off in response to a threat, according to a study published in the journal Proceedings of the Royal Society B. Researchers say other birds may also have co-opted the basic mechanical sounds of flight for communication purposes. Biologists were curious about how all the pigeons in a huge flock knew to launch themselves into the air at the same moment. Because the birds don't use vocal calls to alert their peers, scientists hypothesized they convey the message using their wings. Researchers first recorded the sounds made by crested pigeons

flying happily around a feeder, then sent in a decoy of a hawk, and recorded their flight from the faux predator. When the researchers later played the sound back for a flock of birds, they didn't so much as twitch at the normal recording. But the rapid clap-clap-clap of the alarmed bird sent them fleeing. Similarly, when the volume or speed of the recording was manipulated, birds only reacted to emergency wing whistles [Discovery News]. Although it's not yet known exactly how the birds make these sounds, the study's results could do more than increase our understanding of bird communication. They could also help repel the pesky birds from places where they are annoying or even harmful, like public parks and airports.

Related Content: 80beats: For Australian Bowerbirds, Smart Is Sexy 80beats: Aesop Was Right! Birds Use Rocks to Raise Water Level 80beats: Not So Bird-Brained After All: Rooks Make and Use Tools 80beats: Mockingbird to Annoying Human: “Hey, I Know You”