Some strange geology pops up in Michigan 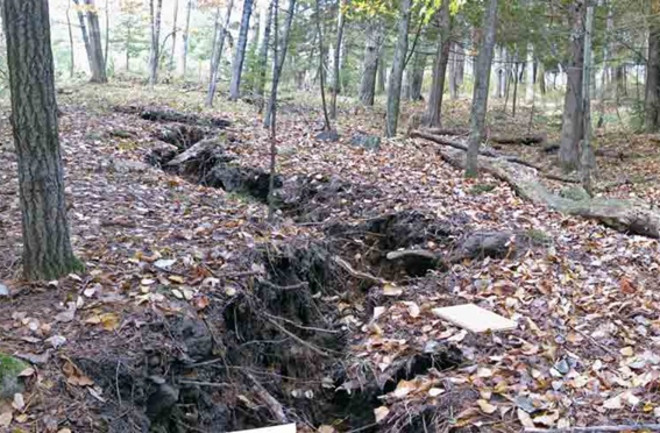 A crack the length of a football field attracted geophysicist Wayne Pennington’s interest; it turned out to be merely a surface clue to the sudden flexing, or pop-up, of the limestone beneath it. Courtesy of Wayne Pennington/Michigan Technological University

So, when Michigan Technological University geophysicist Wayne Pennington saw reports about a crack the length of a football field suddenly appearing in some swamp and woods in the northern area of the state’s Upper Peninsula, he assumed it was a small landslide. As local media attention continued, however, he decided to check it out.

The crack appears to be a pop-up, or A-tent, a geological feature caused by rock layers springing up after weight above them is suddenly removed. It’s typically seen in quarries or the path of a retreating glacier. But figuring out what the crack is solves only part of the mystery.

When I got there, I wasn’t at all prepared for what would deserve some additional attention. Coming from a meeting, I was still in my business clothes — I wasn’t dressed for tromping around in the woods and a swamp.

I didn’t have any equipment to make any measurements, so I was pacing things off in my dress shoes. I used my smartphone to measure the angles of trees and record GPS coordinates. I used a pad of paper that I’d taken from the hotel so I could take notes.

I was completely baffled by it.

There had been a very large pine tree knocked down in a windstorm a couple of weeks earlier. This being the Upper Peninsula of Michigan, it’s our habit to harvest wood like that to use it for firewood. Local people hauled the wood away one day and then two days later, when they went back to finish cleaning up the brush, they discovered the pop-up.

They had felt the pop-up, too — it felt like a small earthquake.

But the crack that caught so much local attention was really not the significant feature; it was just the surface stretch mark of the flexure of the ground beneath it. Some significant forces were involved in creating this.

Going back over aerial photographs, we noticed that something happened alongside the road 20 to 30 years ago. We suspect that it might have been a repair of the drainage system and ditch work alongside the road. It runs for maybe a quarter-mile, right to the uphill end of the pop-up.

Wild speculation is that the drainage system changed alongside the road so that the water was directed to drain downhill, which happened to route it right where the pop-up eventually occurred. Building speculation on speculation, maybe that weakened the limestone so when the tree was removed, that was just enough. That was the final straw to cause the pop-up.

We couldn’t find anything in the literature about contemporaneous, naturally occurring pop-ups. I imagine there are others; they just haven’t gotten into the literature, or we haven’t found them yet.