Could You Outrun a Hungry Tyrannosaur? 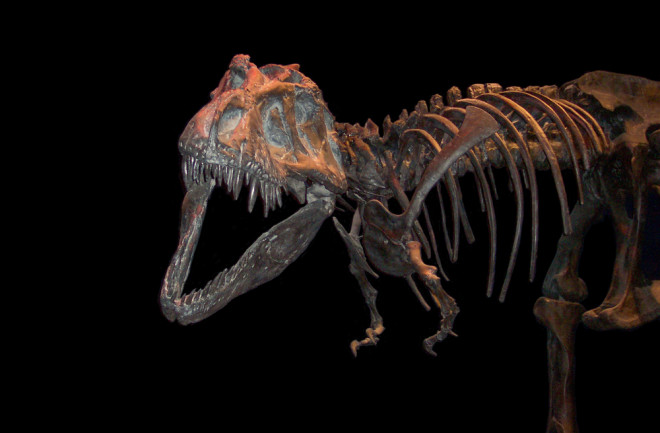 (Credit: Rod Beverley/Shutterstock) One question has always burned in the minds of paleontologists: If Tyrannosaurus rex was still around today, would it be able to catch and eat you? The problem stems from our ability to accurately reconstruct the speed of extinct animals when all you have to go off are their bones. Trying to figure out where all the muscles went and the forces exerted by them during sprints, especially with dinosaurs, is no easy task. Trackways, a series of foot impressions, are key evidence in speed investigations, as scientists can use footprints to work out how fast an animal was traveling when they made the tracks. Unfortunately, T. rex trackways are notoriously rare. But under the guidance of University of Alberta paleontologist Scott Pearsons, three trackways were recently discovered on the surface of an ancient, dried up riverbed — known as the Lance Formation — in Glenrock, Wyoming.

The 66-million-year-old footprints of a tyrannosaur on a stroll are cemented in stone. (Credit: Scott Pearsons) The tracks were created by a sub-adult T. rex or Nanotyrannus lancensis, and could help shed light on whether it was a ferocious athlete, as depicted in the iconic Jurassic Park car chase scene, or more of a slow-and-steady kind of hunter. The largest footprint measured 18.5 inches long and 14.5 inches wide, which indicated belonged to a hefty animal. Further, the print also included three forward-facing toes and a rear-facing toe, much like a modern bird. These combined features allowed researchers to determine the track belonged to a large theropod, and T. rex is the only one known that lived during that time and locality. Based on the position of the trackways, it was clear that the animal was enjoying a brisk walk at the time. Based on the distance between the footprints and estimates of its hip height — calculated from similar-sized museum specimens — the pace T. rex was moving when it created them could be calculated.

The researchers estimated the walking speed of the T. rex to be 2.7 to 5 mph, which is much slower than, say, Usain Bolt, who clocks in a maximum sprinting speed of 27.3 mph. For context, the average walking speed for a human hovers around 3 mph. The calculated speed indicates T. rex was traveling at a slow trot, and at a speed similar to other large carnivorous dinosaurs. Still, even when walking, tyrannosaurs moved covered more ground in a single step than the large herbivores that they coexisted with and presumably hunted. Researchers published their Glenrock trackway findings in the journal Cretaceous Research. But how does this fit with previous estimates of T. rex speed, based on other lines of evidence? Tony Martin, a trace fossil expert and professor at Emory University and unaffiliated with the study, said the new findings are in line with past estimates. “Biomechanical studies of tyrannosaur bones, combined with calculations of their musculature and computer models, tell us that tyrannosaurs were more suited for walking and probably could not outrun, say, a jeep,” says Martin.

The track record seems to be converging on the same results researchers get from models using computer simulations. “Although that might sound boring, it’s actually quite exciting, because it helps us more accurately visualize tyrannosaurs as real, living animals in their ecosystems about 70 million years ago,” says Martin. But these trackways actually do very little to tell us about the hunting behavior of T. rex, as they could simply represent an everyday activity like strolling down the beach. In spite of this, Martin believes these trackways will be of great value for future discoveries and investigations of T. rex. “These tracks will help paleontologists more easily recognize other tyrannosaur tracks that are out there, just waiting to be discovered,” says Martin. “Once identified, at least a few of those tracks should give us more clues about whether or not young tyrannosaurs constituted a Cretaceous teen hunger force.” Based on the evidence, it seems like anyone in decent shape could've outrun a T. rex. “Would I have challenged T. rex to a race, just to see how fast it could go? Probably not,” Martin added.