Could Past Global Climate Have Been Changed by an Eruption ... in Scotland? 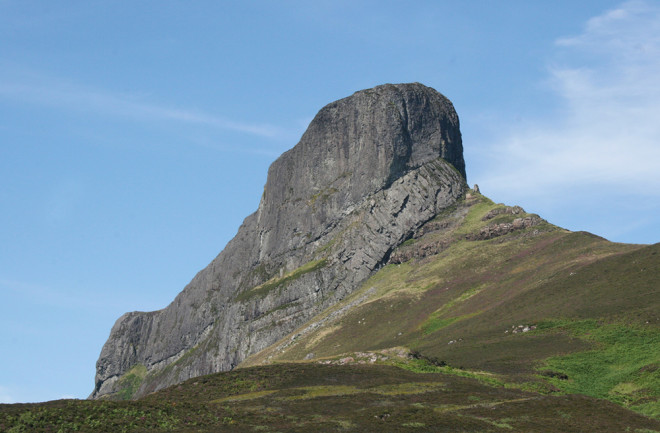 'Sgùrr of Eigg in Scotland, the location of some of the deposits of a massive explosive eruption in Scotland 56 million years ago. <a href='https:

We don’t tend to think of the British Isles as a land of volcanoes. However, over geologic timescales, things can be very different. ~50-60 million years ago, the North Atlantic Ocean was opening and the area around the modern North Sea was rife with volcanic activity. Much of these eruptions were lava flows, producing flood basalt provinces similar to the Columbia River Basalt — but now mainly under the waters and ice of the North Atlantic and Greenland. Yet, over in what is called the British Paleogene Igneous Province (BPIP), there may have been massive, explosive eruptions that rivaled the largest eruptions of the past 500 years.

A lot of rock can be lost over ~56 million years. The effects of erosion, especially thanks to multiple pulses of rivers and ice sheets, can erase much of the evidence of even giant geologic events. Such is the case in Scotland, where the remnants of the volcanism are scattered across the landscape. Trying to match up pieces of volcanic material that are tens of kilometers apart can be tricky: do they represent a single, big eruption or many smaller eruptions (or possibly not even an eruption at all, but rather magma cooling underground!) The best ways to match these rocks is to look for clues in the composition and textures of the minerals and rocks.

If two areas have the same types of minerals that show similar sizes and shapes of those crystals, then maybe they are from the same event. If the bulk composition of the rocks match, that’s even better. However, the processes of alteration of rocks by metamorphism or weathering can change bulk composition, so we need some even better evidence. That’s when we turn to isotopes of elements like neodymium, strontium, oxygen, lead and more. Many of the elements aren’t moved around by alteration, so they lock in the values of the processes that formed the rocks. So, match your isotope compositions, likely match your rocks.

That’s what Valentin Troll and others did for some suspicious rocks in Scotland. They recently published a paper in Nature Scientific Reports that implicates an area on the Isle of Skye in Scotland for a massive volcanic eruption that might have been 5 to 6 on the Volcanic Explosivity Index. That would put it in with the aforementioned Pinatubo and Krakatau, disgorging possibly 5 to 15 cubic kilometers of magma in a giant explosion. There isn’t much left of this eruption beyond some units of pitchstone (think of an old, weathered, dark volcanic rock like obsidian), but several areas across northern Scotland appear to match in minerals, composition and isotopes — all signs they might be a single volcanic deposit.

'Reconstruction of the potential pyroclastic flows from the Isle of Skye eruption 56 million years ago. From <a href='https:

Reconstruction of the potential pyroclastic flows from the Isle of Skye eruption 56 million years ago. From Valentin and others (2019), Nature Scientific Reports.

If this is the case, then an eruption ~56.7 million years ago in Scotland may have buried over 1000 square kilometers of countryside in ash and pyroclastic flow deposits. An eruption of this size would likely produced an ash plume that reached at least 40 kilometers, injecting volcanic aerosols like sulfur dioxide into the stratosphere. This would spread the material globally and potentially impact global climate.

Interestingly, there is a significant climate event around 55.5 million years ago called the Paleogene-Eocene Thermal Maximum (PETM) where global temperatures were high. Although this single eruption wouldn’t have caused such an event (likely it cooled the climate for a few years), if you have lots of these events, it could tip the planet towards climate change. The evidence from places around the North Atlantic is that there were lots of big explosive eruptions related to the opening of the Atlantic, so maybe they played a role in the PETM transition.

Back to Scotland! The chunks of rocks that were evidence of an eruption can be matched using these composition and isotope tools to rocks that cooled underground on the Isle of Skye. This means that these intrusive rocks are likely the source of this massive eruption, implicating that some of the pyroclastic flows may have traveled up to 40 kilometers (see above) from the source! This new evidence from the Isle of Skye marks the first time a massive, explosive eruption has been identified and potentially sourced in the British Isles.

So, go back 56 million years ago, and what is now moors and mountains was a geologically-active region with volcanoes that may have rivaled some of the largest caldera volcanoes today. However, the endless reworking of the surface of the planet has erased the much of the evidence of even a gigantic and globally-significant event like the Isle of Skye eruption. It took the equivalent of volcanic forensics to piece together the scene of the blast.