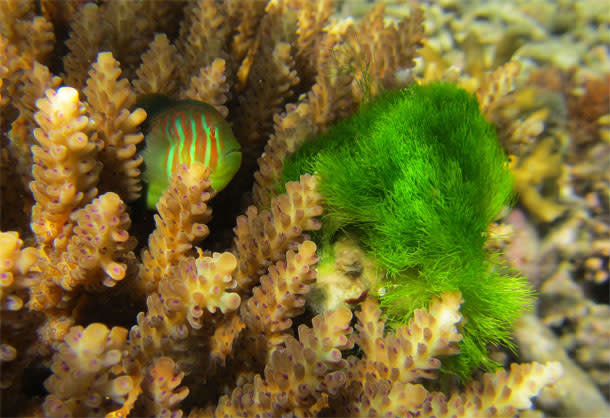 For corals, gardening’s a matter of life and death. Corals compete with algal seaweeds for space, and many types of seaweed release chemicals that are toxic to corals, act as carriers for coral diseases and boost the growth of dangerous microbes. These dangers require close contact—the seaweed poisons won’t diffuse through the water, so they need to be applied to the corals directly. And that gives the corals an opportunity to save themselves. When they sense encroaching seaweed, they call for help. Danielle Dixson and Mark Hay from the Georgia Institute of Technology have found that when Acropora corals detect the chemical signatures of seaweed, they release an odour that summons two gardeners – the broad-barred goby and redhead goby. These small fish save the corals by eating the toxic competitors. In return, one of them stores the seaweed poisons in its own flesh, becoming better defended against its own enemies. This alliance between corals and gobies is vital for more than just these partners. Acroporans include species like the staghorn and elkhorn corals, which are reef lynchpins. Because of their fast growth and vast, branching structures, they add to a reef’s architectural complexity, providing shelter and support for a rich diversity of other residents. Dixson and Hay confronted the coral Acropora nasuta, a cream-coloured staghorn species, with either turtleweed – an algal seaweed that’s toxic to corals – or a bunch of nylon that looked like turtleweed. The corals were home to several different fish, but the gobies were the most common residents. They were found in around 80 percent of staghorn colonies, and stay in the same ones for their entire adult lives. These fish act as invaluable bodyguards. They destroyed around 30 percent of the impinging turtleweed within 3 days, and reduced the damage it inflicted on the corals by 70 to 80 percent. When the corals sense diterpenes – the chemicals that turtleweed releases – they respond with their own chemical alarms within 5 to 15 minutes. It’s these coral compounds, rather than the diterpenes themselves, that attract the gobies. Dixson and Hay proved that by taking samples of water from around corals that had been damaged by turtleweed, and from the algae itself, and squirting them at resting gobies. Only the former mobilised the fish. This partnership is very specific. The gobies will respond to chemicals from the staghorns that they live in, but not from other corals that are threatened by algae. Partly, they ensure that their homes aren’t destroyed. But the broad-barred goby gets an extra benefit. Unlike the redhead goby, which just removes turtleweed, the broad-barred actually eats it. This species secretes a toxic mucus from its skin, potent enough to ward off hungry predators like cardinal fishes. But Dixson and Hay found that the mucus becomes more toxic after a meal of turtleweed, causing predators to lose their balance in half the time. On land, ants help trees in the same way that gobies help the corals. For example, the Amazon rainforest, the ant Myrmelachista schumanni protects Duroia hirsuta, the tree that it lives in, by stinging rival plants and injecting them with formic acid. The result is a “devil’s garden” – an clearing where D.hirsuta is the only plant standing. The coral-goby system is slightly different in that the coral actively signals its partners to assault its competitors. These fish may be disproportionately important for their tiny size. By guarding their corals, they ensure that hundreds of other reef-dwellers have stable homes. It’s perhaps no surprise that reefs in marine protected areas, where fishing is verboten, tend to have more grazing fish, higher densities of coral, and less competing algae. Sadly, such reefs are disappearing, and many around the world are losing the battle against seaweed competitors, perhaps due to environmental changes like overfishing, global warming, and increasingly acidic oceans. With corals under threat, it becomes even more important to understand the factors – gobies included – that make them resilient. Reference: Dixson & Hay. 2012. Corals Chemically Cue Mutualistic Fishes to Remove Competing Seaweeds. Science http://dx.doi.org/10.1126/science.1225748Image by Danielle Dixson More on corals: