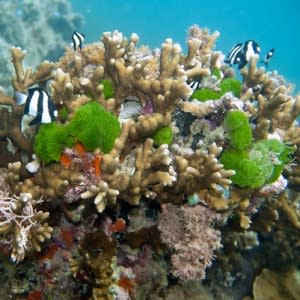 Just below the ocean's surface, a war is being waged. Coral reefs are under constant assault by seaweeds which seek to take control, stealing the coral's prime sunlit location for themselves. Many of these plant invaders come equipped with deadly chemical weapons that knock down the coral's metabolism, which might come off as an unfair fight against a seemingly unarmed foe. But corals aren't defenseless; as a new paper in Science shows, corals have fish bodyguards at the ready to mount a defense. Coral reefs are one of the most productive ecosystems on Earth. They're also one of the most threatened. While managers and scientists struggle to find ways to protect these precious habitats, coral cover has decreased by 50% along the Great Barrier Reef and 80% in the Caribbean. The losses ripple up the food chain, causing declines in fisheries and ecosystem services. But not all organisms mourn coral declines—when corals struggle, seaweeds reap the benefits. Corals and seaweeds are in a constant struggle for dominance. On healthy reefs, seaweeds are kept in check by plant-eating fishes and invertebrates which keep the algae from overtaking their coral homes. When these herbivores are lost, like when sea urchins underwent a massive die off in the Caribbean in the 1980s, the algae run rampant, reducing habitat complexity and leaving many fish homeless. Up until recently, it appeared that corals are relatively passive in this ongoing battle. But now, scientists from Georgia Tech have found that corals actively recruit defenders to fight algal invasions. "We had been studying coral-seaweed interactions to determine which seaweeds were most damaging to which corals and the mechanisms involved," explains study co-author and professor in the School of Biology at Georgia Tech, Mark Hay. He and his post-doc Danielle Dixson discovered that the seaweed Chlorodesmis fastigiata is particularly chemically toxic to corals, emitting lipid toxins that harm corals that they come in contact with. Yet in Fiji, where the experiment was conducted, corals seemed to be holding their own. Given the important role of herbivores, the team decided to see if the fishes living in the corals might be fighting back on behalf of their homes. So, they took Acropora nasuta colonies (an important reef-building coral) that had resident gobies and removed the fishes from some of them. They then placed algae or an algae mimic made of nylon line on the corals and watched the corals over a few days to see what happened. 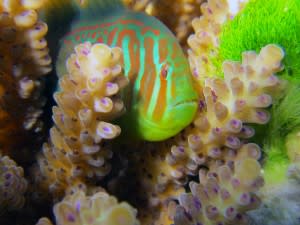 While the fake algae (which physically covered the coral but lacked the chemical weaponry of the algae itself) had no effect, the corals where algae was transplanted were all damaged by the introduction of the competitive plant. But, the scientists noted, the corals that retained their fish residents were much better off. After three days, the amount of seaweed left on the corals was reduced by 30%, and the corals themselves suffered only 20% - 30% the damage of the corals without their fish colonies. Assured of the important role of the fishes living in the corals, the team further investigated the interplay between the fish, coral and algae. The team introduced Chlorodesmis fastigiata to corals again, but this time they watched how the fish reacted. Within minutes, small gobies—only inches in size—emerged from their hiding places to pick at and eat the seaweed. "These little fish would come out and mow the seaweed off so it didn't touch the coral," said Hay. But to really understand what was going on, the scientists took water samples from next to undamaged corals, corals damaged by algae while the algae was still present, corals damaged by algae after the algae was removed, and the algae alone away from coral. They exposed gobies to these water samples and watched how they responded. In less than 15 minutes, gobies were drawn to the water from damaged corals, but didn't react to the chemical signature of algae by itself. "We found that the gobies were being "called to" the area damaged by the algae, and that the "call" was coming from the damaged coral, not from the seaweed." "This species of coral is recruiting inch-long bodyguards," explained Hay. "This takes place very rapidly, which means it must be very important to both the coral and the fish. The coral releases a chemical and the fish respond right away." The scientists even tested the gobies by using water from seaweed damage of a different but closely related coral species, but the fish didn't react. "The gobies came to the rescue of their host coral but did not respond to a related coral's chemical cues," said Hay. 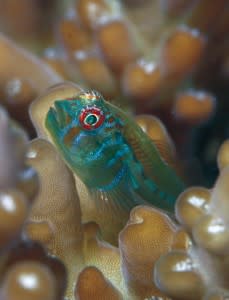 The gobies aren't being entirely selfless. Gobies don't just eat seaweed—they also eat mucus from the coral itself. "The fish are getting protection in a safe place to live and food from the coral," explains Hay. "The coral gets a bodyguard in exchange for a small amount of food. It's kind of like paying taxes in exchange for police protection." In addition to defending their homes, the team found that one of the little fish species gets an extra defensive boost from eating the invading seaweed. "One of the gobies was known to produce a toxic skin secretion," explained Hay. "This goby consumed the toxic seaweed and became more toxic," thus helping to protect it from potential predators. The other main species of goby found in the coral doesn't have this defense, but it still fought off the attacker. "It trimmed back the seaweed from its host coral but did not consume the seaweed - it apparently just trimmed it and spit it out." The scientists were even able to narrow down what in the seaweed is causing the coral's cry for help. The team took different fractions of seaweed chemicals and applied them to fake nylon mimics. Only the extract containing the known lipid chemical weapon triggered the fish defense system. "I'm an ecologist that studies chemically-mediated interactions, but the wonderfully subtle, nuanced, and specific chemical dance being conducted here is still shocking to me," said Hay. He noted that these findings highlight the significance of mutualistic interactions on coral reefs. "Competition among some seaweeds and corals has been important enough to drive the evolution of this wonderfully well-tuned signaling among a coral and its mutualistic fishes." While similar mutualistic defense systems are well described in terrestrial species, this is the first time such an interaction has been shown in a marine environment. Hay also emphasized that, at least when it comes to ecosystems, size really doesn't matter. "Organisms need not be large or abundant to be ecologically important," said Hay. "These tiny, inconspicuous fishes are important in slowing, or preventing, the damage that seaweeds do to corals and thus are important, but unappreciated, in stabalizing reef corals and preventing coral loss and reef decline." Citation: