Coprolites Give The Straight Poop On Cretaceous Carnivores 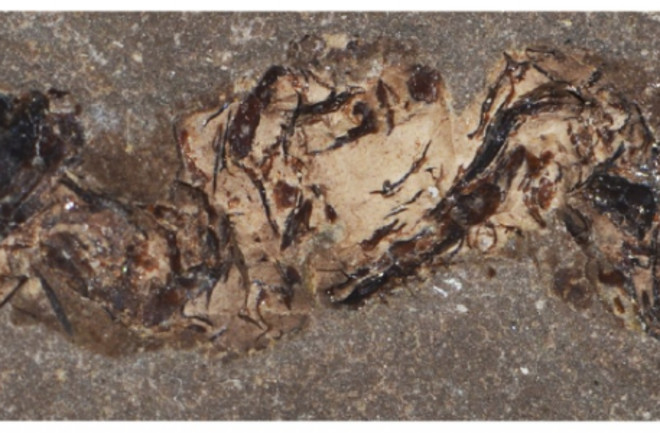 Hundreds of coprolites, such as this "rosary" type, hint at the biodiversity of an Early Cretaceous ecosystem in Spain. (Credit Barrios de Pedro, et al (2018)) Rosary, fir tree and bump-headed lace... you might think those classifications refer to different shapes of seeds or butterfly wing color patterns, or something else that inspires a touch of poetry. Nope. We're talking excrement. Researchers working with hundreds of samples of fossilized feces — coprolites — from a site in Spain were able to reconstruct a rare picture of biodiversity within a freshwater wetlands system more than 125 million years ago. Coprolites are not uncommon in the fossil record, but Las Hoyas, an Early Cretaceous fossil site in Central Spain, is really full of...them. Researchers chose 433 coprolites from the thousands collected and analyzed them both by appearance and chemical content. For starters, the excellent state of the fossilized feces — preserving "integrity" and "volume," according to the new study — suggested that the samples had been deposited in an aquatic environment and then quickly covered by microbial mats, carpet-like layers of bacteria and other organisms commonly found at the bottom of lakes and other bodies of water. The study is by no means the first to analyze coprolites, but the material is usually found in terrestrial and marine environments rather than the freshwater sediments of Las Hoyas. Having such a large and diverse sample set, the researchers were able to reconstruct what the site's food chain might have been like and see how it compared with the diverse fossils found at the location, which include insects, many fish, amphibians, bivalves, crocodiles, dinosaurs, and even a mammal. Ship-Shape The team grouped the coprolites into a dozen categories based on shape, or morphotype, including spirals, elongated and cylinders, as well as more complex morphotypes such as rosary, fir tree and bump-headed lace.

An example of fir tree coprolites, named for their shape rather than any coniferous content. (Credit Barrios de Pedro, et al (2018)) Spirals, fir trees and rosaries were the least common morphotypes. Thin lace and cylinder types dominated. And if you're thinking this is all just a load of coprolites, consider that morphology, the study of form, helps researchers understand biodiversity whether they're studying skulls or ichnofossils (the fancy umbrella term for coprolites, fossilized footprints and other preserved clues of the deep past that are not just a bunch of mineralized bones). You Are What You Eat...And Poop The team confirmed that most of the coprolites in their sample were from predators; chemical analysis indicated high levels of phosphorus and calcium, typical of flesh-eating, bone-crunching carnivores. Bone fragments and fish scales were often found in the samples as well, offering further evidence of the animals' non-vegetarian ways. Despite diving into details during their analysis, the researchers were cautious about matching coprolites to specific species, though they did offer some potential candidates. The scant spiral scat, for example, had to have been produced by an animal with a spiral valve in its digestive tract, which makes the most likely Las Hoyas suspect a species of shark. Perhaps it's no surprise the spiral coprolites were the rarest in the sample: The site's fossil record is also light on sharks. The cylinder coprolite morphotype, on the other hand, was among the most common at Las Hoyas, and was typically chockfull of bony bits. The researchers note that the cylinder shape is similar to that of living crocodiles' scat, which also typically contains bone fragments.

Bump-headed lace coprolites. (Credit Barrios de Pedro, et al (2018)) More details could be gleaned from the coprolites, say the team, through molecular analysis, which has not yet been attempted. The study appears today in PLOS ONE and is open access, so dig in.