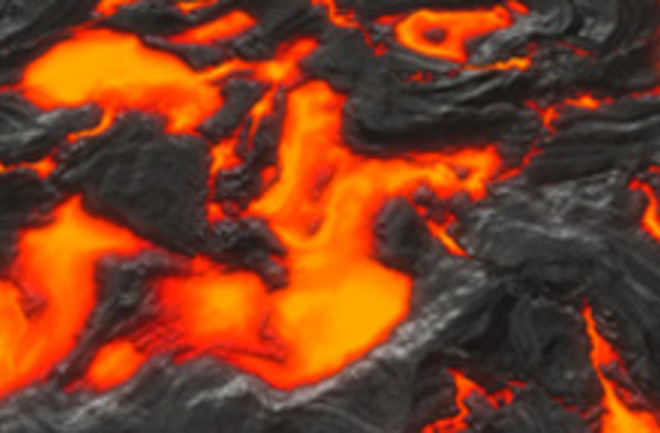 African chimpanzees know how to handle wildfire, as DISCOVER noted last month. But lava is a different deal. Nyamulagira, a volcano in the Democratic Republic of the Congo, began to erupt over the weekend and threatened not only the people nearby, but also the endangered primates that live in the area. The southerly lava flow appears to have spared most human settlements and the mountain gorillas of Virunga National Park, but the native chimps haven't been so lucky. The

40 eastern chimpanzees that live on Nyamulagira itself could still be at risk if they are surrounded by lava, and as the plants they rely on for food become coated by abrasive volcanic ash. Park officials hope animals in the lava's path will simply move away from it [New Scientist]

. United Nations peacekeepers, who are in the Congo to protect civilians from the seemingly unending war there, have offered the country's leaders the use of UN planes and helicopters to monitor the situation. Innocent Mburanumwe, a warden of the nature reserve, didn't even recognize the disaster at first.

"I thought there was fighting again near our park station," he said, referring to the conflicts which have wracked eastern DR Congo. "Then I saw the mountain was on fire with sparks flying" [BBC News]

. Due in large part to that Congolese warfare, the chimp population was already in decline before this eruption.

. No official count is available, though, because it's simply too dangerous for conservationists to work in the area. Virunga National Park is Africa's oldest, and its mountain gorillas account for 200 of the 720 remaining in the world. But this has always been a precarious area. Nyamulagira tends to erupt every three or four years; its last explosion came in 2006. In happier volcano news, the lingering threat to the Philippines seems to be waning. For weeks Mt. Mayon threatened to erupt, sending many people scrambling to get away. But the government says that volcanic earthquakes have diminished in number, and officials reduced the alert level for Mayon. Still, the volcano may yet emit many tons of sulfur dioxide as it degases. Related Content: 80beats: Chimps Don't Run From Fire—They Dance with It 80beats: Do Hot, Dry Conditions Cause More African Civil Wars? 80beats: Drilling Into a Stirring Volcano Is (Probably) Safe DISCOVER: 20 Species We Might Lose, including mountain gorillas DISCOVER: Gorillas Learn to Keep the PeaceImage: iStockphoto