Cockroaches and geckos disappear by swinging under ledges... and inspire robots 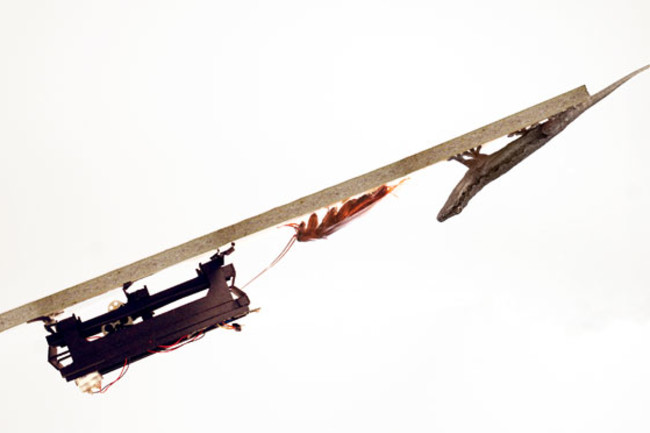 One minute, a cockroach is running headfirst off a ledge. The next minute, it’s gone, apparently having plummeted to its doom. But wait! It’s actually clinging to the underside of the ledge! This cockroach has watched one too many action movies. The roach executes its death-defying manoeuvre by turning its hind legs into grappling hooks and its body into a pendulum. Just as it is about to fall, it grabs the edge of the ledge with the claws of its hind legs, swings onto the underneath the ledge and hangs upside-down. In the wild, this disappearing act allows it to avoid falls and escape from predators. And in Robert Full’s lab at University of California, Berkeley, the roach’s trick is inspiring the design of agile robots. Full studies how animals move, but his team discovered the cockroach’s behaviour by accident. “We were testing the animal’s athleticism in crossing gaps using their antennae, and were surprised to find the insect gone,” says Full. “After searching, we discovered it upside-down under the ledge. To our knowledge, this is a new behavior, and certainly the first time it has been quantified.” [embed width="610"]http://youtu.be/Ov5YUVRcYHA[/embed] His postdoc Jean-Michel Mongeau analysed the roach’s special move with high-speed video cameras. He showed that it doesn’t slow down as it runs off the ledge, and instead transfers 78 per cent of its energy straight into its swing. It can pull off the move with just one leg, and relies entirely on its claws; if Mongeau shaved these off, the cockroaches crashed. The manoeuvre isn’t unique to roaches. Mongeau found that geckos do the same thing, anchoring themselves with claws and sticky hairs on their feet, and swinging pendulum-like onto the undersides of ledges. When the team saw what the geckos did, they immediately contacted their colleague Ardian Jusufi, who was studying the lizards in a wildlife reserve in Singapore. “To his surprise, he found that a gecko, chased to the end of a broken bird’s nest fern leaf, also disappeared,” says Full. With high-speed cameras, Jusufi showed that the wild lizards used exactly the same trick that their peers did in the lab. Presumably, it allows them to escape from predators by appearing to disappear from sight. 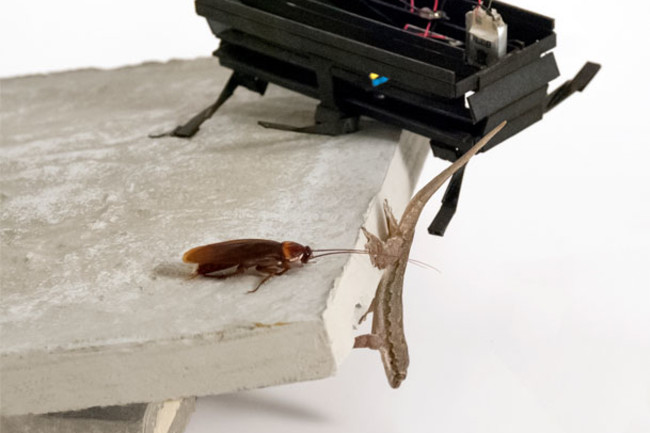 If discovering a new behaviour in two disparate animals wasn’t enough, the team then designed a robot to pull off the same trick. They called it DASH, which stands for Dynamic Autonomous Sprawled Hexapod. Like the roach and gecko, it could run straight off a ledge and swing to safety at the last minute. “Our serendipitous discovery not only helps explain why tiny animal pests we chase seem to disappear, but it inspired a robot’s design,” says Full. “Once again, you never know where fundamental research will lead.” Full’s vision is to eventually build robots that are agile enough to take part in search-and-rescue operations, by clambering over, under and around fallen rubble. He takes his cue from animals, and has used natural movements to build robots that can run, climb, and leap. But for now, the bots aren’t very good at moving between different surfaces, such as jumping from flat plane to vertical wall, or traversing gaps. “Transitions are the next step,” says Full. “Ultimately, if we want search-and-rescue robots to assist first responders in the rubble left after an earthquake, tornado or explosion, or have greater capability to more rapidly detect chemical, biological or nuclear hazards, we must build far more agile robots with animal-like manoeuvrability,” he says. The roach and gecko could help. Their newly discovered behaviour hints at ways of achieving agility by redirecting energy efficiently. The fact that DASH could mimic their movements is promising, but the bot was cheating slightly. Without the benefit of the roach’s claws or the gecko’s hairs, the team had to attach a pad of Velcro to DASH’s hind legs, and a complementary pad on the ledge. Ronald Fearing, also at UC Berkeley, is now working on artificial claws for the little robot. Reference: Mongeau, McRae, Jusufi, Birkmeyer, Hoover, Fearing & Full. 2012. Rapid Inversion: Running Animals and Robots Swing like a Pendulum under Ledges. PLoS ONE http://dx.doi.org/10.1371/journal.pone.0038003Images and videos by Jean-Michel Mongeau, Ardian Jusufi and Pauline Jennings. Courtesy of PolyPEDAL Lab UC Berkeley. More from Bob Full’s group