Cloudy with a Chance of Virus 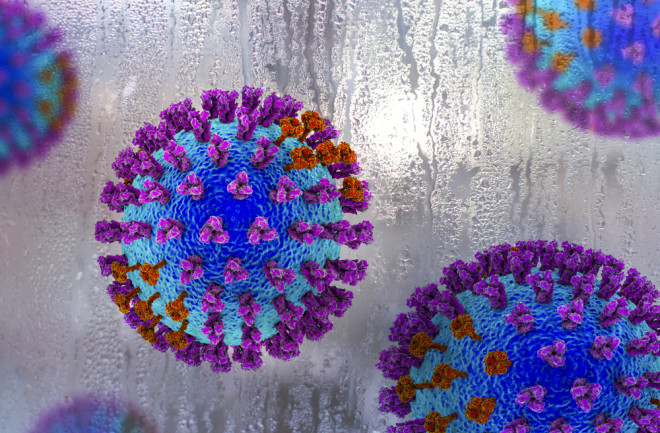 An illustration of viruses against a damp window (viruses not to scale). (Credit: Shutterstock)

I, like a lot of other people on the internet, love rain. What can be nicer than a cool, refreshing burst of liquid precipitation, a sound so soothing people can actually pay to hear during dry spells?

It’s good for dirty walkways, good for the plants, good for skydiving viruses…wait, what?

Yes, it turns out that the rains are particularly rife with falling viruses. A 2018 study published in The International Society for Microbial Ecology Journal is a census of the viral invaders falling upon us at all times. It’s not pretty.

While Carl Sagan apparently never said his famous catchphrase, the scientists behind the study did. Specifically, “the downward flux of viruses ranged from 0.26 × 10^9 to >7 × 10^9 m^−2 per day,” meaning you’d see greater than 7 billion of them per square meter per day in some areas.

They’d apparently hitch a ride from tiny bits of dirt and sea foam swept into the winds, then weather patterns would allow them to float around in the atmosphere before eventually coming back down. Scientists had already known bacteria can travel this way, but the new research showed viruses are logging all the air miles as they are 9 to 461 times more numerous.

Rain and dust storms are good ways to bring both types of organisms back down to Earth, though viruses were less affected by the rain than bacteria.

Getting a read on the number of viruses falling from the sky helps answer a decades-old question among virologists. Apparently, they’d been spotting viruses with remarkably similar genetic makeups in different environments all over the world, and weren’t sure how that could be.

Perhaps it’s just as simple as a virus getting swept up into the atmosphere in one continent, and drifting down onto another—along with billions of its closest friends. The new findings don't really change anything other than our understanding of things. Still, I’ll at least never look at a rainstorm, dust storm or clear blue sky the same way.