Body lice need human clothing to survive. That relationship has proved a boon for Mark Stoneking, an anthropologist at the Max Planck Institute for Evolutionary Anthropology in Leipzig, Germany, who has used it to figure out when humans started wearing garments. He and his colleagues performed a genetic analysis to determine when body lice evolved, which reveals when their clothing habitat appeared: 72,000 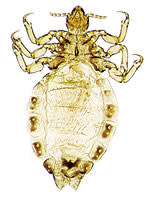 years ago, give or take 42,000 years. That is surprisingly recent, considering that Homo sapiens was around 200,000 years ago or earlier.

Body lice, and hence clothing, may have appeared around the time when modern humans started to explore the world beyond Africa, which many researchers now place at 50,000 to 100,000 years ago. “Clothing may have been important in the spread of modern humans into colder climates,” Stoneking says. Supporting that idea, the oldest unambiguous evidence of clothing-making tools also appears around this era. Groups related to modern humans—including Homo erectus and the Neanderthals—trekked out of Africa considerably earlier, but the new analysis suggests they did so naked. Neither got as far as modern humans, and of course, neither still lives. Perhaps clothes really did make the man.