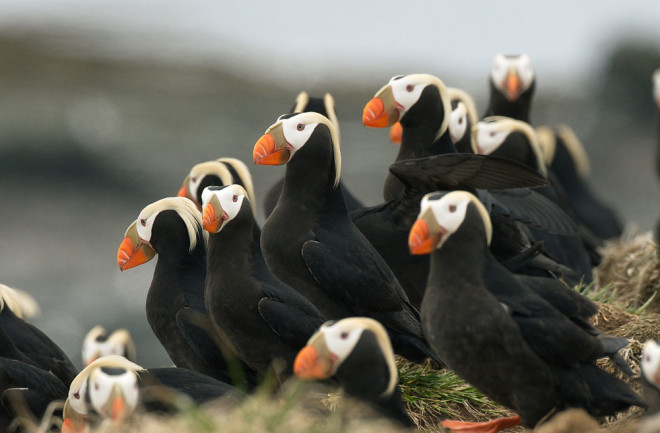 From beached whales to strange seal die-offs, mass marine life mortality events are getting more common. And thanks to changing temperatures, mass seabird deaths are on the rise as well.

A study published Wednesday in the journal PLOS One catalogs a four-month period starting in October 2016 where researchers and volunteers collected dead seabirds from St. Paul Island off the Alaskan coast in the Bering Sea. They found more than 350 dead tufted puffins, horned puffins and crested auklets — three species common in the region.

What Killed the Puffins?

The researchers didn’t find any signs of disease or infection in the analyzed bird carcasses. Rather, they think the birds starved to death. Many were severely emaciated and died as they were molting, which is a time of added stress.

Seabirds feed on small, cold-water fish and zooplankton — small organisms that play a vital role in marine food chains. But warming ocean temperatures have made it harder for those species to survive in the Bering Sea. A 2017 study in the Journal of Plankton Research found that some zooplankton burned energy faster in warm waters. This made it hard for the organisms to survive the long, warm months on the Bearing Sea shelf with enough energy to complete their developmental cycles. With less zooplankton able to survive, seabirds — as well as fish — are left with a lack of sustenance.

The discovery of the beached birds on St. Paul came at an especially strange time in the season — fall and winter — when researchers typically find fewer carcasses. And scientists were also surprised to find large numbers of dead tufted puffins and crested auklets. Both species were nearly absent in long-term previous studies of mass die-offs.

Bad Outlook for the Birds

Those puffins and auklets are listed on the IUCN’s Red List of Threatened Species, which inventories plant and animal species throughout the world and determines if they are vulnerable, endangered or extinct. All three types of birds have a decreasing population. Although none are vulnerable or endangered yet, the species are not stable.

Cool-weather seabirds on the Alaskan coast aren’t the only ones that have struggled in recent years. In 2018, National Geographic reported on mass die-offs of several species in Iceland including Atlantic puffins, black-legged kittiwake and black murres. Those researchers came to a similar conclusion — the birds simply cannot find enough food.