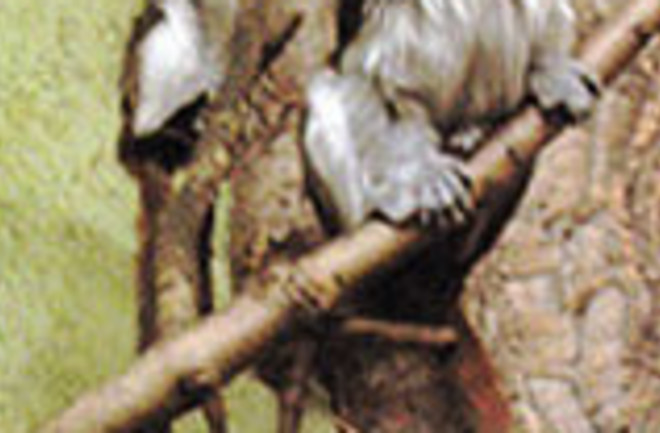 Cotton-top tamarin monkeys can distinguish between "right" and "wrong" grammatical patterns, according to a study published in the journal Biology Letters. The findings suggest that humans share the ability with other species to identify certain patterns that are crucial to spoken communication. Researchers wanted to find out if the monkeys, which do not communicate using spoken language, could recognize grammatical sequences. To do this, the scientists familiarized the monkeys with a series of sounds and patterns. They did this by first playing recordings of humans saying two-syllable nonsense words, and familiarized the monkeys with either a prefix or a suffix.

"In the prefixation condition, they heard 'shoy-bi', 'shoy-la', 'shoy-ro' and so on," explained Ansgar Endress, lead author of the study. "The idea is that they get used to the pattern if you play it long enough" [BBC News].

The next day the scientists played new words for the prefix monkeys, but this time included some words in which the prefix had been changed to a suffix, like "na-shoy." (They did the reverse for the suffix monkeys.) The scientists hypothesized that when the monkeys heard this "incorrect" sequence of sounds, they would be more likely to look at the loudspeakers from which the sounds were coming, the same way a human would. For example, if a person said he or she "walked to the store," and then [used] the word "edwalk" instead of "walked," the listener, used to hearing "walked" might stare at the speaker as if to say, "Huh?"

The monkeys responded to the sounds as predicted: when an unfamiliar sequence played, such as na-shoy, the animals looked at the speakers more often, the researchers found. According to Endress,

"If they got used to, or bored by, the pattern, then they might be more interested in items that violate (it) - because they are something new - than in items that are consistent with the pattern" [BBC News]. The scientists say this shows that humans might use brain processes to understand language that are based on memory, and which are not specific only to language itself. In fact, humans share the recognition of the order of sounds with other animals, says coauthor Mark Hauser. "In bird song or whale song, for example, there's a temporal ordering to the notes and that's critical for communication"

Although the study doesn't show that monkeys can use or learn language, it does show that they can remember and recognize familiar grammatical patterns.

Furthermore, the results of the study not only indicate that human language may have evolved from basic memory processes, but also may give scientists a glimpse into how we learn grammar rules, such as past- and future- verb tenses.

Endress explains: "Our results suggest a fairly pedestrian mechanism: human infants, like monkeys, might be particularly prone to track what occurs in the first and the last position of words and other linguistic units. They might use these mechanisms of memory organization for learning affixation rules" [New Scientist].