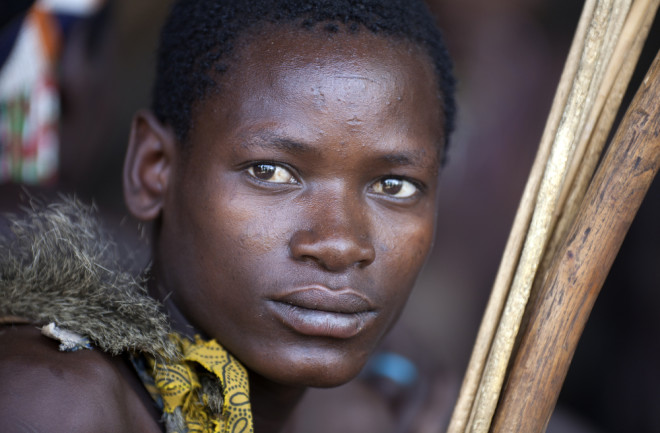 An unidentified member of the Hadza tribe in Tanzania. (Credit: Papa Bravo/Shutterstock) We tend to blame the fruits of industrialized society – the Internet, mobile devices, long hours in the office — for stripping us of a good night’s rest. But are we really sleeping less now compared with our distant relatives, before iPads and PowerPoint presentations were invented? According to a provocative new study, the answer is no. A UCLA-led team of researchers analyzed the sleep patterns of people living in three tropical, preindustrial societies still thriving today in Bolivia and Africa. You won’t find a computer screen or a light bulb in these communities, but people living in these pre-modern conditions have sleeping habits that are strikingly similar to your average city dweller, challenging the belief that modern society is robbing us of our natural beauty sleep.

The societies of the Hadza in northern Tanzania, the San in Namibia and the Tsimane in Bolivia all function without a single electrical outlet or cell phone. Since it’s nearly impossible to study the sleeping habits of past cultures, researchers turned to these three communities to gain insights into natural human sleep cycles, unadulterated by modern technology. Researchers strapped Actiwatch-2 devices on the wrists of 94 individuals living in these societies. The Actiwatch-2 is basically a wristwatch with advanced sensors that measure light exposure and activity levels to track a person’s sleep patterns. Individuals wore the devices between six and 28 days. In all, researchers gathered a combined 1,165 days' worth of sleep data from the study group. As it turns out, people living as naturally as you can still slept about 6.4 hours a night on average, and they rarely took naps during the day. We tend to assume that the setting sun dictates bedtime in preindustrial societies, but these groups of people hit the sack roughly three hours after sunset. In other words, despite vastly different cultures and technologies, human sleep habits are pretty similar. The researchers concluded that sleep in industrial societies has not been reduced below a level that is normal for most of our species’s evolutionary history. They published their findings this week in the journal Cell Press.

Still, in industrialized society, health experts have declared a national sleep crisis. Researchers are racing to understand the ways our sleep cycles are thrown off kilter, and how those disruptions affect our health. It’s estimated that up 70 million Americans have a serious sleep disorder. The notable difference in pre-modern humans was that they didn’t report high rates of insomnia. Researchers who studied the three preindustrial societies believe we could learn a thing or two about sleep disorders from them. For example, preindustrial people fell asleep three hours after sunset to ride a wave of falling night temperatures rather than the setting sun. They found that temperature, rather than the sun, seemed to be a major regulator of sleep patterns. The lower ambient temperatures, researchers hypothesized, helped these individuals fall asleep faster because they didn’t have to actively shed heat to achieve the body temperature reduction that accompanies the onset of sleep. Perhaps turning down the thermostat before tucking in at night would help us return to a more “natural” sleep pattern. There’s hope, it seems, that our modern lifestyles can still accommodate our natural sleep instincts.