Cities Are Bad for Bumblebees—Except Detroit 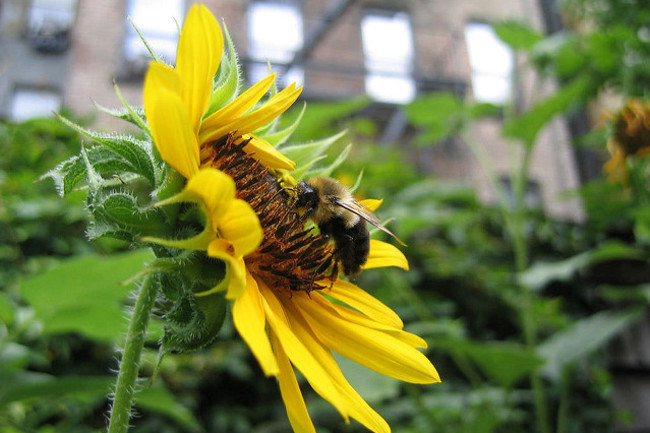 For bumblebees, big cities are a bummer. Layers of asphalt, concrete, brick and metal add up to fewer places for the insects to nest. But one big city—Detroit—reverses that trend. That means shrinking cities might be a growing opportunity for at-risk pollinators. Bumblebees (species with the genus name Bombus) are, like other bees, in trouble. Their numbers and diversity are decreasing across North America. Other native wild bees—the insects that have been living here and pollinating our plants for ages—are declining too, along with domestic honeybees, which only arrived in North America in the 17th century. Pesticides are one factor that's likely contributing to the loss of bees. Another is loss of bee habitat, write Paul Glaum and his colleagues at the University of Michigan. Where we build cities or cultivate industrial farms, we remove potential nesting sites—especially for species that build their nests in the ground, like most bumblebees do. Earlier studies of how urban development affects bees have had mixed results. To elucidate the question, Glaum and his coauthors studied bumblebees around southeastern Michigan during the summers of 2014 and 2015. They collected bumblebees at 30 sites across Dexter, Ann Arbor, Ypsilanti, Dearborn and Detroit. They chose these cities, which vary widely in population and density, to represent a spectrum of urbanization. The sites themselves were mostly urban gardens or urban farms, with a few nature reserves and rural farms included too. The researchers used traps and nets to collect as many bumblebees as they could, returning to each site several times from late spring to early fall. In all, they collected 520 bumblebees from 10 species. The scientists looked for relationships between the number and variety of bees at each site and features of that location: temperature, flower abundance, how built up the surrounding area was. Their results were confusing—until they separated Detroit from the rest of the cities. In the other Michigan cities in the study, more urbanization meant fewer bees. To stand in for urban development, the researchers measured "impervious surface cover" around each site. This was the proportion of land covered with pavement or building material. Study sites with more impervious ground in a 500-meter radius surrounding them had fewer bees, and fewer species of bees. (The difference was entirely driven by female worker bees. Numbers of males, which aren't pollinators, didn't vary with urbanization.) But in Detroit, the trend reversed. The data from the other cities predicted that the most developed parts of Detroit would have close to zero bumblebees. But the researchers collected about 20 bees from 5 out of the 6 Detroit sites—a bee bounty similar to less-developed sites from other cities. At the sixth Detroit site, researchers caught 41 bees, which was just one bee shy of the total from the least-developed site in the whole study. That site was inside a nature reserve. Glaum and his coauthors think vacant lots might resolve this riddle. As much as a third of the city land in Detroit is sitting vacant. Ypsilanti, by contrast, has about 13 percent vacancy; Ann Arbor has about 9 percent. More vacancies mean more unmowed lawns and fewer applications of pesticides—which means bumblebees might find a greater variety of flowers, and more places to build their nests, in the yards of abandoned homes. "Our results suggest that shrinking cities present unique ecological patterns," the authors write. In other words, the flight of people from a city might leave room for troubled pollinators to fly back in.