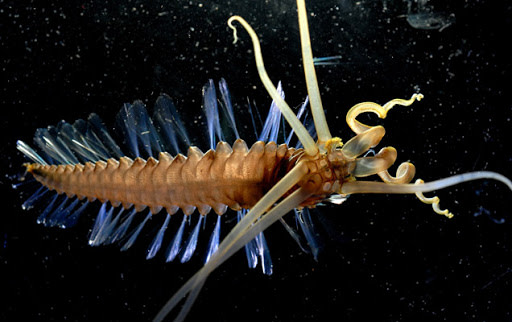 1. The scientists who discovered this bizarre new species (above) swimming thousands of meters under the Pacific Ocean appropriately dubbed it the:a) squiderpillarb) squidwormc) Worminatord) tentipede

2. In one of these M&M-eating studies I am somehow never invited to take part in, researchers discovered that subjects ate fewer M&Ms after they:a) saw pictures of insectsb) ate an insectc) imagined being obesed) imagined eating a bunch of M&Ms

3. Back in 2003, controversial "hobbit" bones were discovered on the island of Flores, leading some scientists to believe that a miniature hominid race once lived there. Researchers have now found evidence that these hobbit people (if they existed) lived alongside:a) dinosaursb) regular-sized peoplec) giant storksd) miniature elephants

4. In a meta-analysis (a study of other studies), researchers found that a person's risk of death from several common cancers can be lowered by a daily dose of:

5. In May, Japanese researchers launched a probe called Akatsuki toward Venus. Akatsuki was supposed to spend two years orbiting Venus and sending back data about its atmosphere and weather. On Monday, the probe:a) crashed into the surface of Venusb) was put out of commission by space debrisc) melted in the planet's intense heatd) missed Venus entirely

Answers are in the comments. Image: Laurence Madin/WHOI.