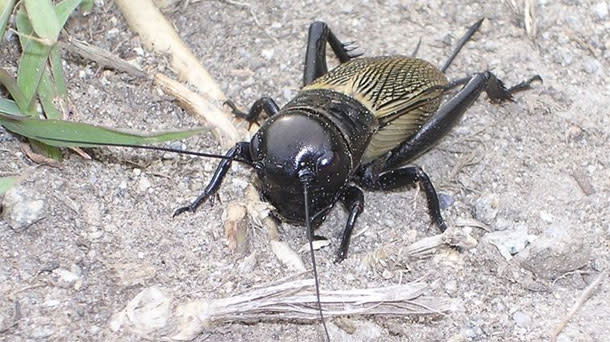 A field cricket couple is in danger. A bird has spotted them, and the pair rush for the safety of their burrow. At the entrance, it’s ladies first: the male cricket waits while his partner dives in first. It’s a delay that could cost him his life. This may all seem very chivalrous, but the male’s seemingly selfless actions also make selfish sense. He may die, but he ensures that his genes pass on to the next generation. Male insects often stay close to female ones after they mate, and people have generally assumed that they’re standing guard. If the female mates again, the first male’s sperm will be flushed out by the second male’s contributions. If he wants to ensure that he fathers he offspring, he’d do well to keep other suitors at bay. But Rolando Rodriguez-Munoz from the University of Exeter found that this narrative of conflict doesn’t quite work for field crickets. He set up a network of infrared cameras to study a wild population of the crickets that had all been individually marked and genetically analysed. The cameras recorded thousands of hours of video, and Rodriguez-Munoz watched them all. Field crickets are territorial. They live in burrows, which they defend against other crickets. They’ll only share their shelters with members of the opposite sex. Rodriguez-Munoz found that a male spends more time with a female if they have sex, but while he’ll keep an eye on her, he’ll never coerce her or block her movements. Rodriguez-Munoz saw any behaviour from the males that could be interpreted as aggression. Instead, the males seem to accommodate the females. They wander further away from their burrows than they would venture alone, allowing their partners to forage in the safe zone closer to the entrance. If the duo is attacked, the male lets the female into the burrow first, often paying a heavy price. Males are four times more likely to be eaten by predators when they’re with females than when they’re alone. Females are almost six times less likely to be eaten in pairs than alone. If a bird succeeds in catching one of the pair, it’s always the male that dies. Both partners benefit. The longer the male stays with the female, the more mating opportunities he gets, and the more sperm he adds to her stores (females can keep sperm tucked away in side pouches for later use). He protects his investment in the next generation by ensuring that the female who carries his young has a better chance of survival. The female could wander away and mate with other males, but if she stays, she gets protection. Rodriguez-Munoz suggests that mate guarding behaviour, as seen in the field crickets, can evolve in two very different ways. It can be borne of conflict, with males actively preventing females from mating with other suitors. To do that, males have evolved all manner of grisly strategies, from mating plugs to life-shortening sperm to spiky penises. These strategies are less effective if the females cannot be coerced, or if they’re fertile for such a long period that males would need to spend too much energy on guard duty. In those situations, guarding only evolves if the females also benefit from the relationship, and female field crickets certainly do. The male is less a guard, and more a consort. In the past, it looked as if this behaviour evolved in field cricket through the first route. Several scientists had shown that a male would guard a female more forcefully, prevent her from removing his sperm, and fight off rival males. But almost all these studies involved crickets interacting with one another in tiny boxes. The lone exception used three metre enclosures – bigger, but hardly roomy. By contrast, Rodriguez-Munoz watched the crickets in their natural environment, and saw very different behaviour. “[These] differences [raise] the question of whether lab situations may produce anomalous behaviours, and at least suggests that observations of wild insects may lead to differing conclusions,” he says. Reference: Rodriguez-Munoz, Bretman & Tregenza. 2011. Guarding Males Protect Females from Predation in a Wild Insect. Current Biology http://dx.doi.org/10.1016/j.cub.2011.08.053Image byRoberto Zanon