Chimps are known to make a variety of tools to aid their quest for food, including fishing sticks to probe for termites, hammers to crack nuts and even spears to impale bushbabies. But a taste for honey has driven one group of chimps in Gabon's Loango National Park to take tool-making to a new level. 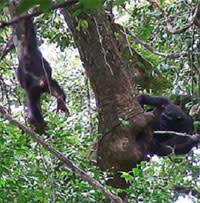 To fulfil their sweet tooth, the chimps need to infiltrate and steal from bee nests, either in trees or underground. To do that, they use a toolkit of up to five different implements: thin perforators to probe for the nests; blunt, heavy pounders to break inside; lever-like enlargers to widen the holes and access the different chambers; collectors with frayed ends to dip into the honey; and swabbers (elongated strips of bark) to scoop it out.

Some of the tools are even fit for the Swiss army, combining multiple functions into the same stick. For example, some were obviously modified at both ends, but one was blunt while the other was frayed, suggesting that they doubled as enlargers and collectors.

These observations were made by Christophe Boesch from the Max Planck Institute for Evolutionary Anthropology and they emphasise yet again the extraordinary brainpower of chimpanzees. It takes an uncommon intellect to be able to design and manufacture a suite of tools and use them in sequence to extract a foodstuff that's hidden from sight.

Boesch spent two years studying the Loango chimps and found that the vast majority of their tools are crafted to steal honey. His team collected more than 600 potential tools, and three independent observers classified them into five types according to the shapes of their ends, signs of wear, and traces of soil or honey. They even managed to directly witness a few instances of chimps foraging for honey, which confirmed the functions of the different tools. Here, Boesch describes a group of nine chimps raiding a tree-based hive:

"[We] heard a heavy pounding sound and saw a large pounder fall to the ground as they arrived, most likely after the nest opening was enlarged... Four individuals were observed making new tools by breaking branches from a tree, modifying them, and then inserting them into the tree hole to extract honey. Once inserted, the chimpanzees were seen to rapidly and forcefully rotate them inside the hole, suggesting that they were first breaking up the internal chambers (with the enlarger) before ''dipping'' for the honey. One adult male was observed to first remove the bark of a Garcinia sp. branch with its teeth and then put one end of the stick in its mouth and chew on it, as if to fray it before using it to extract honey. A short while later, an adult female with two fabricated sticks approached the nest entrance and let her juvenile offspring lick the end of the first stick, while she used the second one to extract more honey."

When raiding treetop nests, the chimps often have to manufacture tools many metres off the ground, while hanging in acrobatic positions. But raiding underground nests is even more challenging. The nests are hidden with few clues to their location. To find them, the chimps need to probe underground with their perforators , something that the team managed to do for themselves, trying their hand with the leftover tools. Even once the chimps have found the nest, they need to dig a sideways tunnel so that the honey doesn't get contaminated with soil. Again, Boesch thinks that they use the perforators to do this.

The whole process demands that the chimps have a good understanding of the structures of nests that they can't see, a strong sense of three-dimensional geometry, and an appreciation of the tools they need to raid these buried treasures.

Building the tools alone takes significant mental agility, of the sort usually attributed to Stone Age humans. The chimps need a different set of related actions to produce each tool and once made, they need to be used in just the right order. The flowcharts below show the types of sequences that chimps must follow in order to fashion the right utensils for robbing ground- and tree-nesting bees. These sequences are much more complex than those used to crack nuts, or even create hunting spears.

Boesch suggests that the benefits of exploiting different food sources, from nuts to termites to beehives, was a major driver for the evolution of complex and flexible tool use. Indeed, other researchers have noted that the sweet allure of honey has been associated with complex tool use among forest-dwelling humans too.

Tool use was formerly considered to be an ability exclusive to humans, but numerous records of tool-using animals have quashed that claim. Since then, biologists have suggested ever-narrower dividing lines between tool-making among humans and chimps, but many of these have also been crossed. Like us, chimps modify natural objects into tools and they put them to various uses including hunting and extracting underground food. They use different tools for different functions and combine many tools for a single purpose. Their designs are even affected by arbitrary cultural rules as much as they are by functional requirements.

There are obviously still big differences - human tools are several orders of magnitude more diverse and complex than those of chimps. But Boesch argues that these are differences of degree - small steps rather than giant, qualitative leaps. He says, "The key difference between both species in this domain might be more one of quantity rather than quality."

More on chimps and tools: 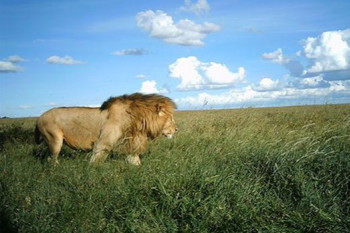