Hollywood cavemen typically communicate with grunts and snorts, reflecting a belief that human language originated like this and slowly evolved into the rich and sophisticated tongues we use today. But researchers from Emory University, Atlanta have found evidence that the origins of human language could lie in gestures, not words. If they are right, then high-fives, V-signs and thumbs-ups could more closely reflect the beginnings of human language than conversations do. 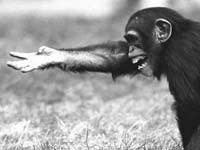 All primates can communicate with each other through facial expressions, body postures and calls, but humans and apes are unique in their use of gestures. These go beyond simple postures or walking patterns - they are movements of the hand, limbs and feet, specifically directed at another individual.

We think of language as mainly spoken or written but gestures play an enormous, often overlooked role. After all, isn't a speaker who waves their hands animatedly more engaging than one who stands motionless behind a podium? Gestures are such an intrinsic part of the way we communicate that a blind speaker will naturally make them even when speaking to a blind audience. And babies use gestures long before they learn their first words.

To understand the role of gestures in the origins of human language, Amy Pollick and Frans de Waal decided to see how they are used by our closest relatives - the chimpanzee and the bonobo. For one and a half years, they watched 34 chimps belonging to two separate groups, and 13 bonobos, again from two groups. Through painstaking analyses, they identified 31 different gestures and 18 different facial and vocal expressions.

The facial and vocal signals were very consistent between the two species. They were used in the same ways, and in very specific contexts, such as play, grooming or fights. For example, both chimps and bonobos scream when threatened or attacked, a gesture that is shared by many other primates. This suggests that these signals are an evolutionarily ancient means of communication, and were probably used by the common ancestor that we shared with both chimps and bonobos.

Gestures on the other hand, were altogether more flexible. They were used in all sorts of situations and carried very different meanings depending on the context. When a chimp stretches out an open hand , it can be asking for support during a fight or for a share of food during a meal. In the same way, a person raising his hand could be greeting a friend, surrendering, or answering a question in class.

Chimps and bonobos also differed considerably in their vocabulary of gestures, with each species having its own 'gesture culture'. The two groups of bonobos even used slightly different sets of gestures to each other.

Pillock and de Waal believe that these studies strongly position gestures as the starting point for human language evolution. In chimps and bonobos, gestures are more adaptable and flexible than calls or facial expressions. They are relatively disconnected from specific emotions and can be more easily controlled. Facial expressions can give away big clues about a person's emotional state in all but the best poker faces, but gestures can be used subtly or even deceptively.

Their adaptability means that gestures can be used in many ways and are free to pick up a variety of symbolic meanings. They pick up cultural differences easily, as shown by the very different 'gesture vocabularies' used by chimps and bonobos.

Pillock's and de Waal's experiments also support other studies which suggest that the language of bonobos is more sophisticated than that of chimps. For a start, their gestures show greater cultural variations. While bonobos combine them with calls and facial expressions less frequently than chimps do, they also respond much more strongly to these joint signals.

Pillock and de Waal believe that the bonobos could be using these multiple signals more deliberately than chimps to subtly change the meaning of a facial expression or vice versa. The chimps on the other hand, may just be using joint signals to say the same message more loudly. Among the great apes, the bonobos may deserve the gold medal for their language skills.