Chimps Don't Run From Fire—They Dance With It 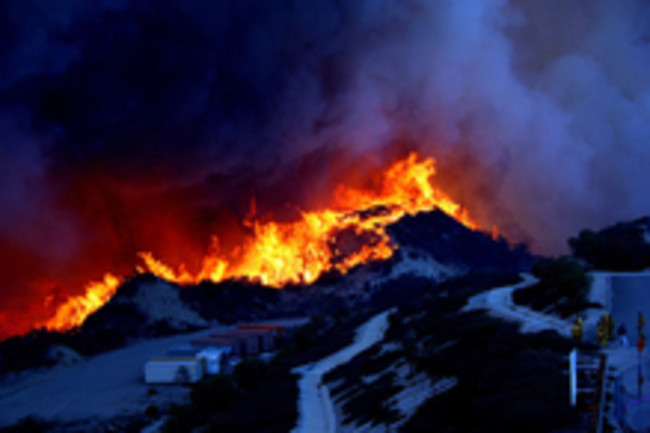 When it comes to understanding fire, chimpanzees might have a leg up not only on the rest of the animal kingdom, but also on those of us in the human species who would sprint in the other direction at the sight of a blaze. A study published in the American Journal of Physical Anthropology argues that these primates don't panic when the flames start, and could even understand the basics about how fire behaves. Primatologist Jill Pruetz has been observing chimps in Senegal since 2001, but it was in 2006 that she first noticed how the animals reacted to wildfire. When people in the area set fires to clear the land, the chimps refused to tuck tail and run.

"It was the end of the dry season, so the fires burn so hot and burn up trees really fast, and they were so calm about it," Pruetz said of the chimps. "They were a lot better than I was, that's for sure" [LiveScience]

. For her study, Pruetz divided up the mastery that humans have over fire in three cognitive steps: understanding how it behaves, learning to contain and control it, and figuring out how to start one.

. As the flames neared her chimps, however, they didn't flee.

If they had, it would have required long travel in the open sun in 110-degree temperatures with scarce water supply. Instead, she said the chimps reacted calmly. They monitored the fire, moved to keep out of its way, and in doing so, minimized the amount of energy they expended to stay safe [Des Moines Register]

. Pruetz even documented the males doing a series of exaggerated motions she dubbed the "fire dance," a nod to the so-called "rain dance" Jane Goodall documented in chimps. And, she said, the chimps uttered a distinct sound in response to approaching fire. Pruetz's paper probably kick up a few arguments over what this really means—whether chimps really "learn" how fire behaves, and whether that shows how early humans might have learned to control fire, which scientists like Richard Wrangham argue was a critical step in our evolution. In any case, if you find yourself stuck in a Senegal wildfire, follow the chimps. Related Content: 80beats: Boom Boom Krak-oo! Have Monkeys Demonstrated Syntax? 80beats: Chimps Catch Contagious Yawns from Cartoons 80beats: Chimp Gathers Stones for "Premeditated" Attacks on Zoo Visitors Discoblog: Only You Can Prevent Forest Fires—But Maybe You Shouldn't DISCOVER: Aping Culture—what's left to separate chimps from us?