In my last post, I wrote about how chimpanzees console one another to reduce the stress of violent confrontations. Conflict and competition are clearly important parts of chimp life and never more so than when sex is involved. The second study this week on the social lives of chimps demonstrates one of the strategies that female chimps use to avoid competition in some cases, and stir it up in others. 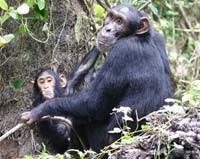 It comes down to sex calls - distinctive calls that female chimps make while mating. New research shows that they do this to advertise their availability to other males and garner both sperm and support. But the females use these sex calls strategically, and they keep things down when other females are around to avoid undue competition.

Chimpanzees are just one of a number of animals that make specific sex calls, but their reasons for doing so have been a mystery. To understand any animal communication, you need to work out who the audience is and until now, we didn't know who was listening into the sex calls of chimps.

Enter Simon Townsend from the University of St Andrews. Together with Tobias Deschner and Klaus Zuberbühler, Townsend spent two years studying a group of 78 chimps in the Budongo Forest in Uganda. The team watched 7 females in particular as they mated their way round the males of the group and found that they only called during a third of their sexual bouts.

But they didn't do so randomly. Townsend found that females were much more likely to make sex calls if their partner was a high-ranking male, a result that contradicts the idea that females call to incite competition among males. According to this theory, rival males fight each other for mating rights and the female ends up with the most dominant suitor. But if it's true, females should make sex calls more often when they're mating with low-ranking males, which is exactly the opposite of what Townsend actually saw. 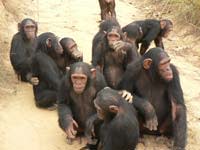 Alternatively, males could vie for sexual success more covertly, through so-called "sperm competition". By mating with a female immediately after another chimp, they can displace the original partner's sperm and fertilise the females themselves without resorting to direct confrontation. If this is the case, then females should call out soon after males have ejaculated, and when they do, it should take them less time than usual to get another partner. But again, this wasn't the case, and sex calls had no bearing on the interval between couplings.

So why do females call? Townsend thinks that one of their motives is to sow confusion. When they mate with high-ranking partners, other dominant males are usually nearby and the female's calls advertises her availability to these alternative partners. That's not just about getting as much sex as possible; their actions stop any single male from monopolising their attentions, and makes it more difficult for males to tell who fathered which youngster.

It pays a females to sow doubt about the identity of a baby's father. If males are completely sure that a particular baby isn't theirs, there's a good chance they will try and kill it. Infanticide is a surprisingly common danger for primates, and it's in the interest of the females to prevent it. They do it by making sex calls regardless of where they are in their menstrual cycle and by mating with a number of different males. This strategy works particularly well if the female's partners are all high-ranking, as they can provide solid protection against the infanticidal tendencies of more subordinate males.

And it's not just other males who threaten a female chimp and her babies. A growing body of research suggests that competition between female chimps is a much more important part of their society than we had previously appreciated. Females have pecking orders just like males do, they compete fiercely for sex, and they will lead child-killing attacks too.

To avoid such competition, Townsend found that females try to hide their sexual congress from other females. The number of males around had no bearing on the frequency of sex calls, but the number of females did. When there were three or more females within earshot, sex was carried out silently, particularly if the listeners were dominant. But if there were two or fewer females around, there was a good chance of hearing a sex call.

Townsend speculates that the calls may even be a way for subordinate females to recruit males into defending them from attacks by dominant females. He documented nine instances of a female being attacked after a callm and while only four of these were instigated by high-ranking females, the assaults they administered were particularly brutal. In contrast, females who stayed silent were never attacked.

So for a female chimp, it's not just a simple matter of finding the strongest mate. Her world is one of strategy and deception, where she confuses males and enlists their support in equal measure, all the while avoiding the unwanted attentions of aggressive females.