It is midday in Senegal and a chimpanzee is on the hunt. Its target is a bushbaby, a small, cute and nocturnal primate that spends its days sheltered in the hollow of a tree, beyond the reach of predators like the chimp. But this hunter is not like others - it is intelligent, it is dextrous, and it has a plan. Snapping off a thin branch, the chimp strips it of twigs, leaves and bark. And with its teeth, it sharpens the tip into a murderous point.

It forcefully jabs its newly fashioned spear into the bushbaby's hiding place, stabbing the hapless animal multiple times. The chimp breaks into the tree hollow that sheltered its prey and drags it from its hiding place, wounded and ready to be eaten.

Many animals, from insects to birds, are known to use tools, but chimpanzees are the most advanced non-human toolmakers of all. They crack nuts with hammers and anvils, and fish for termites using sticks. But fashioning weapons, and using them to hunt is a fresh and advanced trick, even for them, and a trait that was previously deemed to be uniquely human.

Bushbabies are powerful leapers and if the chimp exposed its hiding place, it would have a strong chance of escaping. So the chimps have developed a technique to take them by surprise, immobilising them for easy capture. This type of planning and the tool manipulation that makes it possible, requires great foresight and intellectual complexity. It is testament to the mental powers of these, our closest relatives. 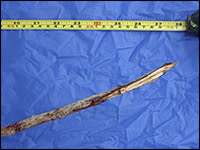 Jill Pruetz and Paco Bertolani from Iowa State University have only seen spear-making in a single population of chimps, living near the Fongoli River in southeastern Senegal. The technique may well be a new one, as only a quarter of the chimps they observed went through all the necessary steps. One young male chimp was even seen using the spear playfully, possibly learning the technique from his elders.

Usually hunting is a pursuit for adult male chimps, but Pruetz and Bertolani only saw females and youngsters spearing bushbabies. They reasoned that these groups usually gain a much smaller share of the meat brought back by the male hunters, because they are physically weaker, or because they are too low in the social order. In a similar way, only female bottlenose dolphins have ever been seen to use tools.

These findings could have startling implications for the origins of human tool use. The traditional wisdom says that ancient human men were concerned with hunting while the women specialised in gathering. But if the Fongoli chimps are any indication, human women could have found specialised hunting niches, and in doing so, played a disproportionately large role in the development of tool technology.

In any case, the Fongoli chimps are clearly worth further study, particularly since their patchwork home of woodland and grassland is reminiscent of the types of places that early humans inhabited. As such, they could provide us valuable clues about how our own technologies began. But they will tell us nothing if they are all dead. All four subspecies of chimp are currently endangered, and in danger from the multiple threats of the bushmeat trade and habitat loss. Urgent efforts are needed to ensure that these intelligent animals will continue to enthral us for generations to come.