Chimpanzee Groups Know How to Deal With Freeloaders 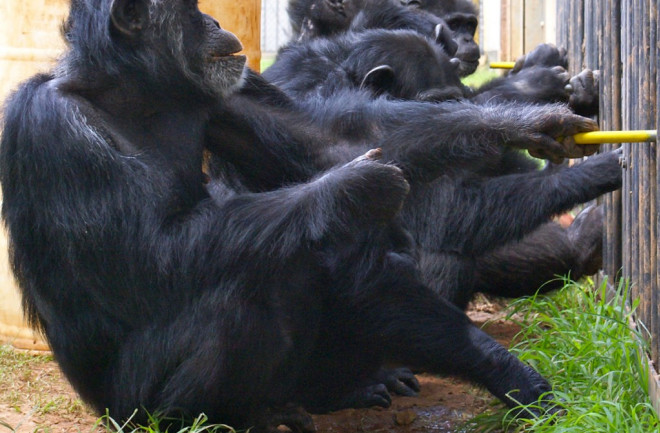 Three chimpanzees pull at the cooperation apparatus, with two others looking on. (Credit: Courtesy of Frans de Waal, Yerkes National Primate Research Center) Chimpanzees are known to be violently competitive in groups — they aren’t exactly team players. But given enough time, it appears they can work together to stifle competition, police freeloaders and cooperatively accomplish a task. Doesn’t that sound familiar? Human society works because we all agree on certain social norms, and we hold each other to them. The old argument is that our ability to make society work by deploying these enforcement mechanisms is a uniquely human skill set. But according to a study published Monday in Proceedings of the National Academy of Sciences, our closest relatives use some of the same social strategies that we previously thought made us special, which means those behaviors may be a much older product of our evolutionary history.

Animal behavior researcher Malini Suchak and her colleagues at Canisius College put 11 chimpanzees in a room with an apparatus that required one chimp to remove a barrier while another simultaneously pulled a tray to receive a food reward. The setup provided a great opportunity for cooperative work, but it also gave the chimps plenty of chances to behave in selfish, competitive ways, such as stealing a reward earned by other chimps or kicking a lower-ranking chimp off the apparatus. If researchers were right about chimpanzees, and about the evolutionary role of cooperation, “the whole experiment should have dissolved into one bickering colony of apes,” wrote the authors. What actually happened was much more surprising.

Despite their reputation for competitiveness, the chimpanzees worked together about five times more often than they chose to freeload or steal another chimp’s spot. It’s not that our evolutionary cousins are naturally virtuous. Every chimpanzee tried freeloading and succeeded at least a couple of times, but in the long run, the group had ways of discouraging freeloading or theft. “It is clear from the data that a cooperative equilibrium takes time to be achieved,” Suchak and her colleagues wrote. The chimps in the study had 94 sessions to work things out, and they did so in strikingly human-like ways. For instance, we might respond to uncivilized behavior by calling out the offenders. Chimpanzees called out bad actors by whimpering, screaming, or baring their teeth. Once in a while, a victim of chimp theft resorted to hitting, biting or grabbing the thief — picture a little old lady walloping a would-be mugger with her purse, and you’ve got the idea. At the office, you may pointedly avoid working with someone who takes credit for your ideas or doesn't pull his weight; in Suchak’s study, chimps pulling at the apparatus would often stop pulling after a theft, or when a known freeloader showed up. About a quarter of the time, chimps went as far as walking away from the apparatus altogether, giving up the chance to get more rewards in favor of not enabling a freeloader.

Choose Your Partner In previous lab experiments, chimpanzees didn’t work well with others. However, past experimental setups may not have given chimps enough freedom or time to come together. Suchak and her colleagues say that giving the chimpanzees the ability to choose – or shun – their own partners made all the difference, because partner choice is an important means of enforcing social norms. “A lot of things probably determined which strategy they chose: the rank distance between the victim and the freeloader, who was around, whether the freeloader was being really aggressive about it, how badly they wanted to keep their place at the apparatus (and opportunity for future rewards),” says Suchak. All those factors, in the long run, reinforce the idea that certain actions just won't fly. “We saw, without any interference from us, that chimpanzees used the same set of strategies as humans do to mitigate competition,” says Suchak. “It suggests that these mechanisms may be a little more ancient and that probably a lot of the strategies may not be as unique to us as we thought.”