In 1997, Swedish inspectors found several stockpiles of missiles hidden in a local zoo. Apparently, the arsenal had been gathered together for the express purpose of being used against civilians. And who was the mastermind behind this collection? A 19-year-old chimpanzee called Santino.

Santino was born in a German zoo in 1978 and transferred to Furuvik Zoo at the age of 5. To this day, he lives in the zoo's chimpanzee island - a large outdoor enclosure surrounded by a moat. Throughout his residence, he was mostly docile towards the eager visitors, but all of that changed in 1997 when he started chucking disc-shaped stones at them.

Now many of us may have secretly wanted to take part in a spot of tourist-stoning, but Santino's antics became so common that visitors were actually in real danger. The zoo staff had to take action. One morning, they swept the chimpanzee island and (unlike some other weapons inspectors) they actually found Santino's arsenal - five separate caches of stones dotted along the shoreline facing the public area. Each one contained 3-8 missiles including concrete slabs, and algae-covered stones that had clearly been taken from the moat.

Mathias Osvath from Lund University, who describes the behaviour in a new paper, believes that it's clearly premeditated. Until now, it's been very difficult to work out if natural chimp behaviour involves true forward-planning or represents a reaction to present circumstances. Is a chimp that gathers twigs for termite-fishing planning for the future, or just responding to a more immediate hunger?

There's no easy answer to that, but Santino's case is much clearer. One of his caretakers, Ing-Marie Persson has collected plenty of evidence to show that he was deliberately stockpiling weapons of individual destruction for future acts of tourist-stoning.

When the stone-throwing was first noted, Persson spent five days in a room overlooking the chimpanzee island to observe Santino's behaviour. On the first morning, before the zoo opened to visitors, he gathered several stones from the moat and stacked them on discrete spots on the bank.

As the afternoon arrived, and the crowd with it, Santino grabbed ammo from his piles and threw them at the visitors. The caretakers rushed to warn the crowd and usher the chimp inside, but not before he'd managed to lob all of his missiles across the moat. He did the same thing over the next four days, and this time, caretakers were positioned in the visitor's area to warn the unwitting targets not to get too close to the rocky "hail storms".

Since then, the caretakers have removed hundreds of ammo caches and a year later, they found that Santino had started upgrading his ammunition. Not content with gathering stones, he had started to add concrete blocks to his arsenal. He even manufactured these himself by gently knocking on concrete rocks in the centre of the island. When he heard hollow sounds that betrayed the presence of cracks, he pummelled the rocks more vigorously until pieces broke off.

Based on these observations and interviews with the zookeepers, Osvath thinks that Santino's aggression was clearly premeditated. He was always visibly agitated when he threw his stones, as indicated by his two-legged loping walk and his hair standing on end. In contrast, he was always calm during the "planning stage" when he actually gathered stones - he wasn't just doing it in response to any immediate desire. The two behaviours were also separated by several hours and Santino only ever gathered ammo before the zoo opened to visitors, so no human could have provoked his ire.

The stones were very clearly an anti-human weapon. Santino never used either stones or concrete slabs for any other purpose other than to pelt tourists. He never chucked them during the six off-season months when the zoo is closed to the public. And he only ever placed them on the shoreline facing the visitors' area, a sector comprising less than a quarter of the island's full circumference. 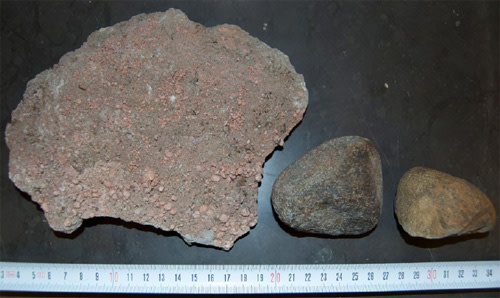 Osvath admits that he had to rely on an "unorthodox choice of methods" for this study, given that the keepers were ethically obliged to protect the zoo visitors from the risk of thrown stones. Despite this constraint, he still managed to accumulate a large amount of data that demonstrates the remarkable intelligence of the chimpanzee.

Santino is an advanced tool-maker, learning to create concrete missiles through its own initiative. And what's more, he showed the ability to plan for the future based on a predicted state of mind, rather than the one he was currently experiencing. A few studies have reported that chimps, orang-utans and scrub jays can plan for the future, but all of these involved behaviours learned in an artificial laboratory setting. Santino's stone-throwing antics, on the other hand, were completely spontaneous.

Reference: Current Biology to be published in 10 March issue