Yesterday, I wrote about selfless capuchin monkeys, who find personal reward in the act of giving other monkeys. The results seemed to demonstrate that monkeys are sensitive to the welfare of their peers, and will make choices that benefit others without any material gain for themselves. Today, another study looks at the same processes in a very different sort of cheeky monkey - human children. 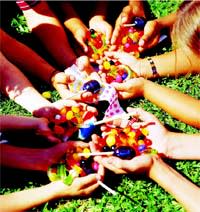 Humans are notable among other animals for our vast capacity for cooperation and empathy. Our concern about the experiences of other people, and our natural aversion to unfair play are the bedrocks on which our societies and moral codes are built. But are we born with this penchant for equality or does it develop as we grow up?

To find out, Ernst Fehr from the University of Zurich played a series of three decision-making games with 229 children between the ages of 3 and 8. The study used similar methods to those employed by Frans de Waal in his experiments on capuchins, but with some notable differences. For a start, the choices were anonymous. In each trial, a child had to decide between two ways of distributing sweets between themselves and a second child, who was only ever represented by a photo.

In the first "prosocial game", the choosing child had to decide between "one sweet each" or "one for me, none for you". As with the capuchin study, neither choice had greater economic merit for the chooser. Purely selfish individuals that ignore their partners are equally likely to choose either option. This is mostly what children aged 3-6 did, but those aged 7-8 started to choose the "one sweet each" option about 80% of the time. 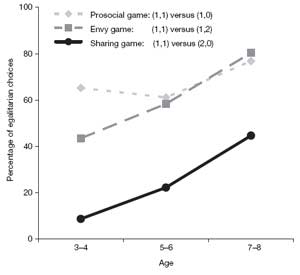 Were they just trying to help the other kid out or were they more concerned about being unfair and hogging the sweets? The second "envy game" showed that the second explanation was more accurate. This time, the choosing child had to pick between "one sweet each" and "one for me, two for you". Again, personal gain didn't dictate a preference and again, children younger than 7 were just as likely to pick both options. But older kids offered their photographic partners one sweet rather than two in 80% of trials; they were more concerned with levelling the rewards than maximising the winnings of the second child.

The final "sharing game" was the only one where sharing involved a personal cost - the first child had to choose between "two for me, none for you" or "one sweet each", thereby sacrificing one of their own sweets so that their neighbour got one. At 3-4 years of age, only 9% of children chose this unselfish option but at 7-8 years of age, about 45% did.

So humans are very unwilling to share with each other at an early age, but are relatively happy to help other children out as long as they don't lose anything in the process. As time passes, their capacity for selflessness matures along with their bodies. Between the ages of 6 and 7, a strong sense of fair play kicks and children start caring about what others are getting and whether it's the same as what they've received. They begin to be drawn towards choices that reward everyone equally. 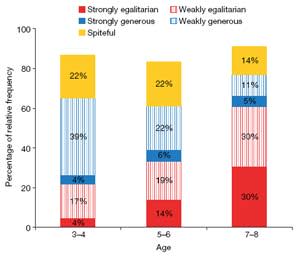 When Fehr pooled the decisions of each child across all three games, he found that only about a fifth of the youngest ones made choices which showed that they valued fair play. Among the oldest kids, three times as many made such choices, and a third of them were exceptionally just and made egalitarian decisions in all three games. There were bad seeds too - children who seemed unusually spiteful and offered up as little as possible in all three games. Only 22% of children aged 3-6 behaved like this and among the older children, that proportion fell further to 14% (which is about where it stays in adults).

Not all children were treated equally though. The youngsters clearly preferred to share with those from their own playgroup or school, and were 15-20% more likely to make fair choices in the prosocial game if another child from the same social group stood to benefit. This cliquey justice was even more apparent in the sharing game; when children had to sacrifice one of their own sweets in the name of equality, their willingness to share with others from a different group actually fell with age. And the envy game revealed that these tendencies were stronger among boys than girls.

Fehr says that his results fit with other theories suggesting that selflessness and parochialism (that is, favouritism towards individuals from your own social group) have the same evolutionary roots and evolved hand-in-hand because of frequent conflicts between rival groups. Males tend to bear the brunt of these conflicts and indeed, the boys in Fehr's study showed a stronger bias towards their own group than the girls did. Culture and education obviously play a role too. As children move toward formal schooling, they develop a better sense of what society expects of them and become more attuned to how they are viewed in the opinions of their peers.

How does the behaviour of these children gel with the responses of the capuchins in de Waal's study? Do the two studies mean that monkeys help each other out to a greater extent than young humans? Not quite. On the surface, these games look very similar but species aside, there are some key differences - Fehr's experiment involved just one round of play, the trials were anonymous and the children were told as much.

This design was used to ensure that the children weren't making decisions in anticipation of a favour returned or out of concern for their own reputation. By ruling out these alternative motivations, Fehr could confidently claim that any selfless behaviour was truly the result of the children looking out for each other's interests. But it also means that the we can't make a simple like-for-like comparison with the capuchins. After all, in that study, the monkeys took several trials to start choosing charitable options, and they only acted in this way when they could see the monkey they were helping.

Studies in chimps need to be analysed carefully too. In 2006, Joan Silk used similar psychological games to show that chimps don't take advantage of opportunities to deliver food to other group members, even if it doesn't cost them anything to do so. Another study by Keith Jensen found that chimps, unlike 7-8 year old human children, show no interest in ensuring that other chimps are rewarded equally. It's tempting to conclude the chimps don't care for the welfare of their fellows, but that would be premature.

Last year, Felix Warneken found that chimps do indeed behave selflessly and will help out other chimps to achieve a goal even if they don't get anything in return. Warneken has also found that human infants as young as 14-18 months show the same type of altruism; like the chimps, they too help each other towards specific ends, like stacking objects or opening cabinets. This willingness to lend a helping hand blooms much earlier than the sense of fairness demonstrated in Fehr's study and Warneken thinks that this is partially because the children in his experiment worked in more natural settings with other children rather than photos.

The resources at stake are important too. Helping another child to stack blocks only uses up energy but sharing food is quite another matter. Being generous with grub could be particularly sensitive to social expectations or a desire to see the favour returned - exactly the things that the anonymous, one-shot trials were designed to exclude. Warneken even suggests that sharing resources and helping one other to achieve goals may reflect two different sides of altruism that have been subject to different evolutionary pressures.