Check Out This Beetle Trapped In Amber For 99 Million Years 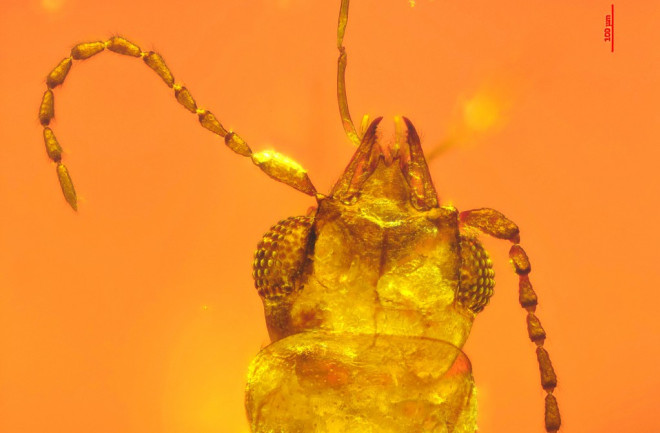 The beetle Cretoparacucujus cycadophilus, trapped in amber along with grains of pollen for 99 million years, likely used highly specialized mandibles for pollination. (Credit Chenyang Cai) A new species of beetle, preserved in a piece of amber along with several grains of pollen, is the earliest direct evidence of an insect pollinating an ancient plant group nearly 100 million years ago. It's also just supercool to look at. To understand why this new beetle with the gigantic name (Cretoparacucujus cycadophilus) is more than just a pretty face, we've got to take a stroll down the paleobotany path. The Mesozoic Era started in the wake of the end-Permian mass extinction (the biggest such event), about 251 million years ago, and lasted all the way until the end-Cretaceous 65.5 million years ago. During the Mesozoic, dinosaurs and pterosaurs came and went, along with a whole bunch of other animals. A group of plants called cycads, particularly common in the Mesozoic's Jurassic Period, witnessed it all. They were around before the Mesozoic kicked in and yes, they're still with us today, albeit in much smaller numbers. Cycads are gymnosperms (so are conifers and ginkgo), which means they don't flower. They also don't produce fruits: Their seeds are just naked, kind of hanging out there. Cycads pre-date flowering plants, and researchers have long puzzled over the early cycad life cycle. Unlike other gymnosperms, which are typically pollinated by the wind, evidence has suggested that cycads were pollinated by insects. Beetlemania That's where our new friend C. cycadophilus enters the picture. Found in a piece of amber from Myanmar along with several grains of cycad pollen, the wonderfully preserved animal is the earliest proof of an insect adapted to pollinate cycads. The beetle has specialized mouthparts and legs that researchers believe were used to collect and spread the particular variety of cycad pollen found with it.

Another shot of the mid-Cretaceous beetle C. cycadophilus with numerous pollen grains trapped in the same piece of amber (at left). (Credit Chenyang Cai) Further analysis of the new beetle suggested it's most closely related to species from South Africa and Australia, some of which are not only still around today but also still pollinating modern cycads. The wide distribution of the cycad-beetle partnership suggests to researchers that it evolved earlier than previously indicated by the fossil record, and makes these leggy little guys possibly the very first pollinating insects.

Artist rendering beetles hard at work pollinating cycads. (Credit Chenyang Cai) Among the traits tipping off the team to the beetle's pollen collecting ways were bristle-lined cavities within its long mandibles, likely used as a kind of insectile fanny pack to collect and store the grains of pollen in transit. Another fun fact about today's announcement: Because the amber preserved the pollen grains so well, researchers were able to determine their genus, Cycadopites. They're the first pollen grains from cycads discovered in amber from Myanmar. The study appears today in Current Biology.

A close-up view of the Cycadopites pollen grains found in the amber. (Credit Chenyang Cai)