Cheating Female Finches Get Their Infidelity Genes from Dad 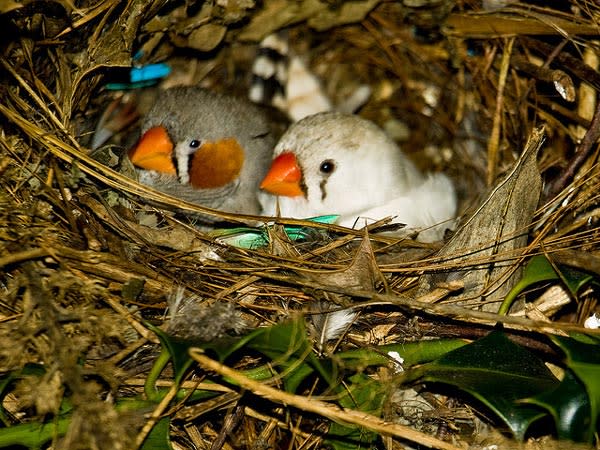 What's the News: Infidelity among monogamous bird couples has always been something of a stumper for biologists. It's easy enough to understand from the male's perspective---the more he plays the field, the more offspring he has. But why do females cheat? True, she might get more genetic variety among her offspring, which could help them survive. But the benefits aren't as clear, especially since she risks losing her mate. To shed some light on the subject, scientists have charted the coupling of zebra finches, which are usually monogamous, and found that there's a genetic reason some females engage in extracurricular activity: they get it from their fathers. And this supports a new take on the evolution of infidelity. Maybe it doesn't have to be in the female's interest to cheat---maybe it just has to be in her dad's interest. How the Heck:

The Future Holds: The genes that lead to infidelity in finches haven't been identified yet, so that's another step to be taken. And what about human infidelity? The researchers note that although biochemical aspects of human attraction, like sensitivity to dopamine, appear to be heritable and linked to promiscuity

, the similarities between men and women in terms of attachment and arousal aren't well enough understood for us to tell whether we, too, have behaviors self-destructive to one sex that evolutionarily even out. Reference: Wolfgang Forstmeier, Katrin Martin, Elisabeth Bolund, Holger Schielzeth, and Bart Kempenaers. Female extrapair mating behavior can evolve via indirect selection on males. Proceedings of National Academy of Sciences. Published online before print June 13, 2011, doi: 10.1073/pnas.1103195108