Cats' memories may be as good as dogs. 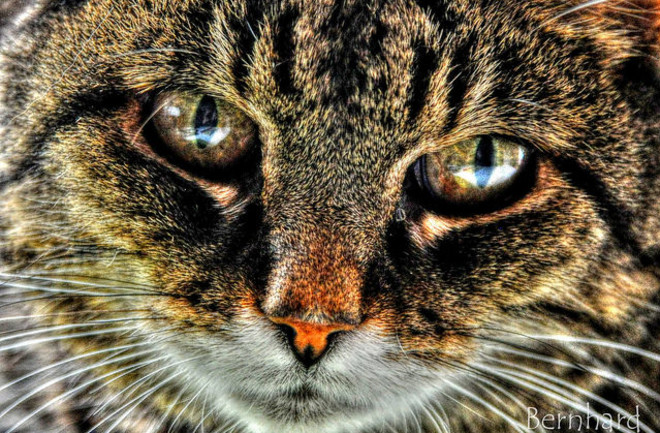 Photo: flickr/Bernhard TinnerCats and dogs don't have many things in common, but according to this study, their ability to remember events might be one of them. Here, the researchers tested whether cats could remember information from a single past event. To do so, the scientists first let the cats explore several containers, some of which contained food. Fifteen minutes later, when the cats returned to the containers, they spent more time at the food containers where they had not yet eaten, suggesting they remembered the ones they had already eaten from. A previous study performed with dogs had similar results. So move over, Rover - you're not the only one with a good memory.Use of incidentally encoded memory from a single experience in cats "We examined whether cats could retrieve and utilize incidentally encoded information from a single past event in a simple food-exploration task previously used for dogs (Fujita et al., 2012). In Experiment 1, cats were led to four open, baited containers and allowed to eat from two of them (Exposure phase). After a 15-min delay during which the cats were absent and all containers were replaced with empty ones, the cats were unexpectedly returned to the room and allowed to explore the containers (Test phase). Although the cats’ first choice of container to visit was random, they explored containers from which they had not previously eaten for longer than those from which they did previously eat. In the Exposure phase of Experiment 2, two containers held food, one held a nonedible object, and the fourth was empty. Cats were allowed to eat from one of them. In the post-delay Test phase, the cats first visited the remaining baited-uneaten container significantly more often than chance and they spent more time exploring this container. Because the cats’ behavior in the Test phase cannot be explained by association of the container with a pleasant experience (eating), the results suggest that cats retrieved and utilized “what” and “where” information from an incidentally encoded memory from a single experience." Related content: Sorry, science says cats simply can’t love you the way dogs can.Scientists make “species-appropriate” music just for cats. Listen here!Contrary to what your cats would have you believe, they do recognize your voice.