Caterpillars use bacteria to produce green islands in yellowing leaves 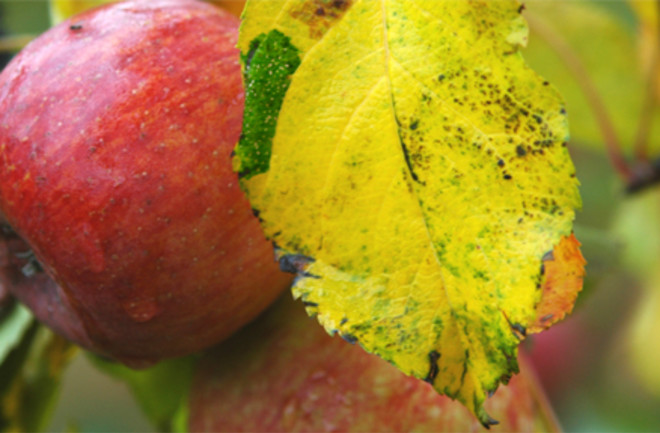 In autumn, as green hues give way to yellows and oranges, some leaves develop mysterious green islands, where life apparently holds fast against the usual seasonal decay. These defiant patches still continue the business of photosynthesis long after the rest of the leaf has withered. They aren’t the tree’s doing. They are the work of tiny larval insects that live inside it – leaf-miners. The larvae were laid within the leaf’s delicate layers by their mother. They depend on it for shelter and sustenance, and they can’t move away. If their home dies, they die, so they have a vested interest in keeping at least part of the leaf alive. These are the miniature landscape architects that create the green islands, and they don’t do it alone – to manipulate the plant, they wield bacteria. Wilfried Kaiser and scientists from Rabelais University discovered this partnership after realising that some bacteria and fungi can also cause green islands. He reasoned that microbes might be helping insects to achieve the same ends. So he searched for them in one particular species, a tiny moth called the spotted tentiform leaf-miner, Phyllonorycter blancardella. Its larva makes its home in the leaves of apple trees. Kaiser found that the leaf-miners are host to just one detectable type of bacteria – Wolbachia. That’s hardly surprising. Wolbachia infects around 60% of the world’s insect species, making it a strong candidate for the title of world’s most successful parasite. Without exception, every leaf-miner that Kaiser tested, from all over the Loire Valley, carried Wolbachia in their tissues. The bacteria were the true agents behind the green islands. When Kaiser cured the leaf-miners of their infections using antibiotics, they seemed perfectly healthy. But they completely lost the ability to stem the yellowing of leaves. As a result, 85% perished before adulthood; for comparion, the typical mortality rate of Wolbachia-carrying larvae is just 10%. Worst of all, since Wolbachia is passed down from mother to offspring, later generations also suffered the same lack of beneficial bacteria, the same inability to produce green islands and the same high odds of an early death.

The bacteria manipulate the leaves using their own signalling chemicals – a group of plant hormones called cytokinins. These substances perform many tasks in a leaf: they maintain the supply of chlorophyll; they prevent the leaf from dying; and they control the flow and storage of nutrients. They’re the barrier that stands between a living leaf and a rotting one. Stick cut plants in cytokinin solution and they’ll stay green for longer. What better tool for a bacterium or an insect looking to prolong the life of its leafy home? Inside a typical mine, levels of cytokinins are much higher than usual. But when Kaiser cured the leaf-miners of Wolbachia, he found that the levels of cytokinins in the mine plummeted to levels typically seen in yellow leaves. Without these hormones, the insects failed to protect their homes. And if Kaiser injected cytokinins into leaves directly, he could create green islands on his own, without the need for either Wolbachia or a leaf-miner. We know that the bacteria are necessary for the cytokinin flood that maintains the mine, but the exact source of these chemicals is unclear. It’s possible that the bacteria secrete them directly, or allow the leaf-miner to do so. Indeed, Wolbachia has a gene that’s important for the creation of cytokinins, and a paper published four decades ago found large amounts of these hormones in the salivary glands of a leaf-miner. The other alternative is that the bacteria encourage the plant to over-produce its own hormones. Of course, all of these possibilities could be working together. Of course, many insects have their own beneficial resident bacteria, or symbionts. These tenants provide them with valuable nutrients that they can’t make themselves, and they can even offer protection against enemies and environmental challenges. But this is the only known example of an insect using a bacterial symbiont to directly manipulate a plant, and it seems to be a successful strategy. By all accounts, leaf-mining is an evolutionary success story, and hundreds of species have adopted this lifestyle. Their partnership with bacteria might be the secret of their success but Kaiser will only know that for sure once he works out how widespread the use of bacteria is, and what these microbes actually do to the plant. Reference:

Images: by Kaiser More on insects and bacteria