If the sound of eating dung all your life doesn't sound that appealing to you, you're not alone. A beetle called Deltochilum valgum shares your distaste, which is quite surprising given that it's a dung beetle. 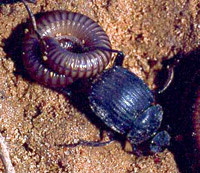 There are over 5,000 species of dung beetle and almost all of them feed mainly on the droppings of other animals (and more specifically, on the rich supply of bacteria they contain). D.valgum is the black sheep of the family, the only one that has abandoned the manure-based diet of its fellows and taken to hunting live meat for a living.

D.valgum lives in the lowland rainforests of Peru, and stalks the forest floor looking for its favoured food - millipedes. Having evolved from dung-rolling ancestors, D.valgum lacks the killing mouthparts that grace the heads of wasps, mantises or tiger beetles. Instead, they use a sharp, shield-like plate on the top of their heads like a chisel to decapitate their prey.

Trond Larsen from Princeton University discovered D.valgum's unusual diet by baiting several pit-traps with all sorts of potential snacks, from dung to fruit to millipedes, both dead or alive. Over a span of 11 months, the traps lured in over 100,000 individual dung beetles. Thirty-five species would scavenge on dead millipedes, but only five tackled live ones. And out of these, only D.valgum ignored all other foods - it only cared for traps baited with live millipedes.

By making small nicks in the millipedes' shells, Larsen showed that D.valgum is an opportunistic hunter, and was over 60 times more likely to attack injured prey than healthy ones. Even so, the beetles were more than happy to tackle millipedes up to 14 times their size and they would fight each other over potential kills. 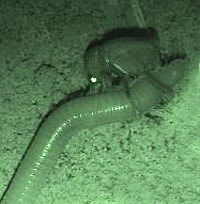 By watching over 37 attacks, Larson managed to piece together the beetles' killing technique and the physical adaptations it has evolved to become a millipede specialist. Its back legs are longer and more strongly curved than those of related species, and it uses these to grasp the millipede's body. If the millipede tries its standard defence of coiling into a tight ball, the beetle simply waits until it relaxes and regains its grip.

The beetle delivered the coup de grace with its clypeus, a plate on its face that carries two sharp teeth. D.valgum has a longer and more sharply angled clypeus than other dung beetles and it uses it as a lever, inserting it between two of the millipede's segments and prying upwards with its head. At the same time, it uses small teeth on its front legs to saw at the same joint. Using its head and legs, the beetle forcibly decapitates the millipede.

Once dead, D.valgum lifts the carcass onto its back, where a special rim keeps it from slipping. It holds the body there with one of its hind legs and walks away on the other five. Once it reaches a safe dining spot, the beetle uses the same killing technique to dismember the millipede even further and feeds by shoving its head inside the segments. The broad head that most species use to shovel dung has been narrowed in D.valgum to allow it to rummage inside a millipede's segment. In the end, all that's left is a selection of empty exoskeleton rings. 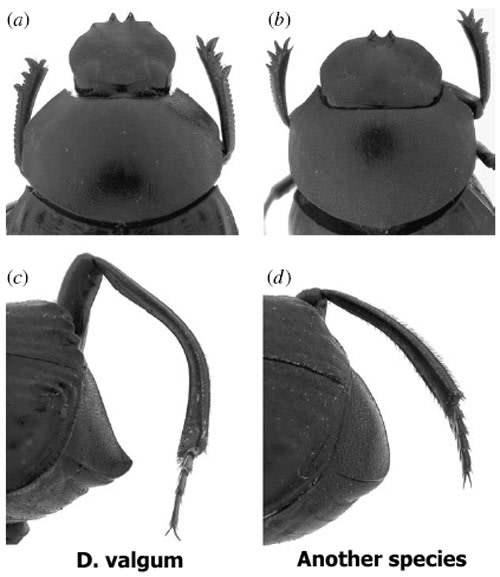 D.valgum's predatory lifestyle is all the more remarkable because it hails from a very diverse group of animals that focus on a completely different food source. Its body is very different to those of more typical predatory insects, but it has nevertheless managed to evolve adaptations that make it an efficient and specialist hunter - a sharpened clypeus, a narrow head, longer legs and lip for carrying its prey.

Larson thinks that the beetles track their quarry through smell, by detecting the defensive chemicals that many millipedes secrete. This may be why they preferred to attack injured millipedes - perhaps they give off stronger scents.

Larsen believes that D.valgum's unusual diet was driven by intense competition with other dung beetles. While dung may not tickle our palates, it's a prized commodity to these beetles and competition for it is fierce, especially since up to 80 species can co-exist in the same area.

Some dung beetles have responded by broadening their tastes to include rotting fruit, fungi and dead animals. A couple of species will even kill queen leafcutter ants to supplement their dung-based diets. But only one species has become a full-time carnivore. In Larson's traps, some species were attracted to dead millipedes and that culinary flexibility may have smoothed the transition between dung-eater and hunter.