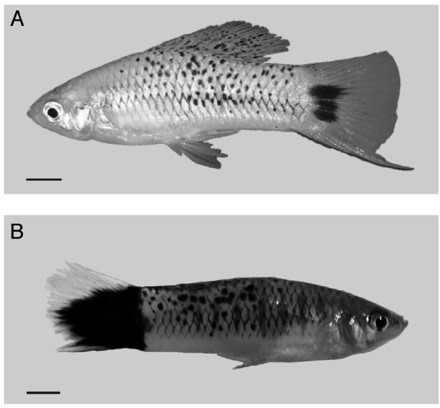 Cancer is not just a terrible disease but a strange one. Tumor cells must switch on certain genes in order to thrive and multiply. You might expect that natural selection would have eliminated those genes, because they kill off their owners. Far from it. A number of cancer genes, known as oncogenes, have actually been favored by natural selection over the past few million years. Oncogenes, in other words, have boosted the reproductive success of their owners, and have even been fine-tuned by evolution. Humans are not alone in getting cancer. In fact, it seems to be a pretty inescapable risk of being an animal. As cells divide and mutate, some mutations may make cells ignore the needs of the body and multiply madly. That's too bad for other animals, but there's a silver lining for us: by studying other animals, scientists can get some clues to how cancer evolves in us. The delicate swordtail (Xiphophora cortezi) is particularly prone to getting melanomas (the bottom picture here shows a fish with a tumor in its tail). When Andre Fernandez and Molly Morris of Ohio University went fishing for delicate swordtails in mountain streams in Mexico, they found six fish with melanomas in a single day's catch. These melanomas are particularly nasty--instead of striking old fish that are going to die soon anyway, they turn up in young breeders and kill them over a few months. Melanomas develop from pigment-producing cells in the skin. As these tumors develop, the cells inside them produce lots of extra proteins from a gene called Xmrk. Despite Xmrk's harm, it has survived in good working order for a long time. Functioning versions of Xmrk exist not just in delicate swordtails, but in related swordtail speices that descend from a common ancestor that lived a few million years ago. How does such a dangerous gene continue to survive for so long? Fernandez and Morris have just published an experiment that might solve the mystery. A lot of delicate swordtails have large dark spots on their tails, like the one shown on the top fish here. Xmrk is essential for producing those spots. Other fish have been shown to use stripes, spots, and other visual patterns to attract mates. So Fernandez and Morris wondered what the female delicate swordtails thought of the Xmrk spots on males. Turns out, they like them a lot. When offered a chance to pay a visit to one of two male fish, female delicate swordtails from two populations in Mexico spent more time with spotted males than spotless ones. And they also preferred to consort with males with big spots over males with little ones. The Xmrk gene definitely imposes an evolutionary cost on fish. But that cost may be erased by the benefit it gives male fish through sexual selection. By the time a male delicate swordtail dies from an Xmrk tumor, he may have mated with a number of females, which will pass down the gene to their young. We humans may also be shaped by the trade-off between sexual selection and the cost of cancer. Testosterone and related hormones latch onto androgen receptors on the surface of some cells. It's important for the development of men's bodies, for example, and the growth of body hair. It also plays a role in the production of sperm. These kinds of traits can affect the success men have in finding mates and having children. But the androgen receptor gene also becomes active during prostate cancer. In fact, versions of the gene that increase sperm count in men also raise the risk of cancer. For more on the sexy side of cancer, check out my article in Scientific American which, I'm happy to report, was selected by author Sylvia Nasar to be included in The Best American Science Writing 2008, which has just been published. (Take a browse online here.)