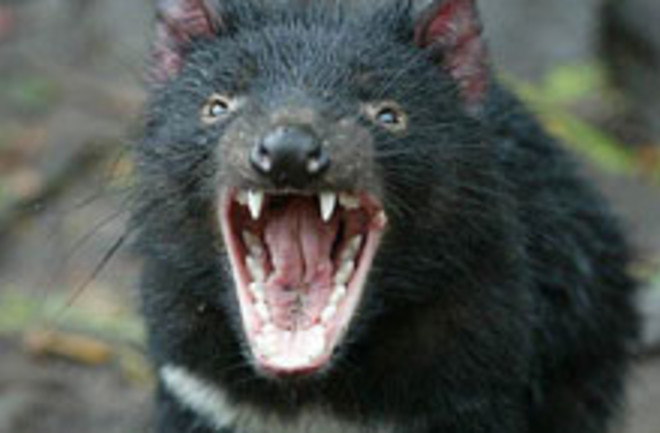 The mysterious and deadly facial cancer that has sent populations of Tasmanian devils crashing now has a known source, according to findings published last week in the journal Science. The ailment originated in nerve cells of the devils themselves.

A genetic analysis of tumors from Tasmanian devils widely separated geographically shows that all the tumors are virtually identical and distinct from the animals' own genomes.... The tumors probably arose from Schwann cells, which normally play a role in protecting and cushioning nerves [Los Angeles Times]

. Tasmanian devils have a lot of nerves on their faces near their whiskers, the researchers note, and therefore have Schwann cells there. Team member Jenny Graves says the tumor could have arisen in one cell in one animal two decades ago, and then passed from devil to devil as they bit each other. The disease has already killed 60 percent of the population.

"The good news is that one of the active proteins is easy to detect and it will give us the chance to diagnose the cancer early, which is important for setting up cancer-free 'insurance populations'," she added. "It also allows us to study the way the cancer changes over a long period, which potentially offers new insights for all cancer research" [The Times]

. Hopefully new insights for these marsupials will come fast; at present rates the cancer could wipe out all Tasmanian devils in 30 to 50 years. Tasmanian devils are an easy target for such a plague because they're such a small, inbred population.